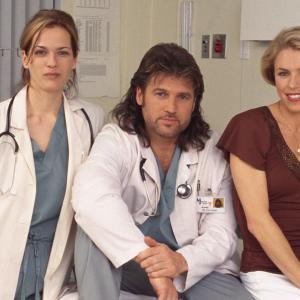 Doc is a fish-out-of-water story with a spiritual twist. Clint’s down home values are integral to his practice of medicine, often allowing him to see things the bottom liners at the fictional Westbury Clinic cannot. The result is a unique combination of faith-based medical drama and nighttime soap opera. Think Touched By An Angel meets E.R. with a dash of The Andy Griffith Show.

So put on your scrubs and enjoy some surprising facts about this heartwarming series.

Although Cyrus began his performing career in the 1980s, his pre-Doc acting work was limited to a few small roles, notably as pool guy Gene Clean in David Lynch’s Mulholland Drive (2001). The “Achy Breaky Heart” singer was “not exactly what we had in mind,” creator Gary R. Johnson said in a 2003 interview. He and co-creator Dave Alan Johnson changed their opinions after Cyrus auditioned, adding “we couldn't imagine anybody else for the part.”

New York City is a great place to set a TV show, but a prohibitively complicated place to film. Toronto, Ontario, Canada stands in for the Big Apple on Doc, with some exterior footage shot in and around NYC (particularly in the pilot). The clinic is located on the Upper West Side and some scenes are implied to take place in nearby Central Park.

Cyrus moved his family from their Tennessee farm to Canada when work began on Doc in 2000. His eight-year-old daughter Miley Cyrus had not yet done any professional performing, but she soon caught the bug and began studying acting and singing in Toronto. Miley made her acting debut in a small role in the 2001 pilot episode, five years before she was cast in Disney’s Hannah Montana (which co-starred Billy Ray).

4. Doc is the title AND the name of two characters.

Most episodes conclude with Clint writing an email to his adoptive father Dr. Harley Johanson (Neil Dainard), whom he calls “Doc.” Doc Johanson appears in about two dozen of the series’ 88 episodes, including the first (where he he gets Clint the job in New York) and the last (where he retires and asks Clint to take over his practice). “Doc” is also Clint’s nickname, along with “Country,” coined by his friend Nate for obvious reasons.

5. Teen Wolf heartthrob Tyler Posey got his start on Doc.

In his first major acting role, nine-year-old Posey plays Raul, a city kid who’s orphaned when his single mom dies. Doc Cassidy promises to look after Raul and becomes a sort of surrogate uncle. Eventually, Raul is adopted by Clint’s buddy Nate and his wife Beverly. While working on Doc, Posey also appeared in Collateral Damage with Arnold Schwarzenegger and Maid In Manhattan as Jennifer Lopez’s son. He was cast in MTV’s Teen Wolf in 2011.

Miley made her second appearance at age nine in November of 2001 as Kiley, a visiting Tennessee girl who plants a surprise kiss on Raul’s cheek. Miley returned two years later in a fourth season episode focusing largely on Raul and Kylie. In a 2015 interview, Posey said that he and Miley spent two years as “boyfriend and girlfriend” while living in Toronto and shared their first off-camera kiss with each other.

7. Miley is not the only Cyrus family member to appear.

Miley’s younger sister Noah Cyrus (born 2000) appears in nine episodes as Gracie, the daughter of Dr. Hebert and his wife Nellie (Linda Kash). Billy Ray’s wife Tish Cyrus makes an uncredited cameo appearance as a nurse in the pilot, which also features cameos by Braison Cyrus and Trace Cyrus (in a scene with Miley). And his niece Annalyn Cyrus appears in three episodes.

In addition to starring in all 88 episodes, Cyrus also wrote and performs the show’s theme song “Stand Still,” which was included on his 2003 album Time Flies. Cyrus also co-wrote the season three episode Nobody, about a baby left on the clinic’s doorstep.

9. Nurse Nancy loses her accent, but gains something else.

Fan favorite Andrea Robinson is introduced as Nurse Nancy in the pilot speaking fluent Noo Yawk-ese. As the series progresses, Robinson drops the Edith Bunker accent, but not her crush on Doc Cassidy. Robinson is a standout, and the episode in which her character’s mother dies is one of the series’ most touching shows. Happily, Doc and Nancy “shippers” won’t be disappointed by the finale.

In the pilot episode, when Clint tells Doc Johanson he’s moving to New York, “Achy Breaky Heart” is playing on the radio. “I hate that song,” Clint jokes.

Doc airs every weekday at 9 am ET, moving to 10 am ET starting September 25. Make sure you have a box of tissues handy.