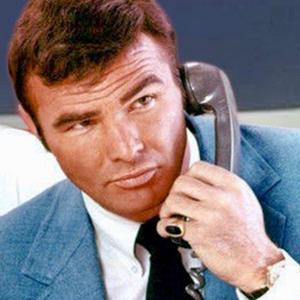 Burt Reynolds was an iconic movie star for decades, but he spent most of the 1960s as a TV actor. Three seasons on Gunsmoke were bookended by lead roles on the short-lived Riverboat and Hawk, with tons of guest spots sprinkled in between. By 1970, after a handful of Spaghetti Westerns and low-budget action films sputtered, Reynolds was at a career crossroads.

So, when producer Quinn Martin (The Fugitive) asked him to return to TV as California homicide detective Dan August, Reynolds jumped at it. Literally. Each episode of Dan August features the former Florida State halfback jumping off moving cars, running through burning houses, leaping out of windows, and otherwise battering his 34-year-old body. Reynolds had studied with stuntman Hal Needham early in his career, and his athleticism lends Dan August a degree of realism that remains exhilarating 50 years later.

You can see what we mean when getTV presents an afternoon-long marathon of this 1970–71 series on the last day of August! (Get it?) Six episodes of Dan August air Saturday, August 31 starting at 1p ET on getTV.

Come for Burt, stay for the guest stars! Dan August boasts an all-star team of familiar faces, many still working today. Would you like to see Harrison Ford (Han Solo) and Billy Dee Williams (Lando Calrissian) work together a decade before The Empire Strikes Back? The Force is with getTV! How about Larry Hagman as a conniving bad guy seven years before Dallas? Just say “howdy” on August 31! And what about Norman Fell and John Ritter six years before Three’s Company? Come and knock on our door!

Fell, as Dan’s deadpan partner Charlie Wilentz, is Dan August’s secret weapon. While Burt finds any excuse to jump on/at a suspect, Fell barely moves, firing off sarcastic observations like slugs from his service revolver. Also memorable is Richard Anderson (Oscar Goldman on The Six Million Dollar Man and The Bionic Woman), who plays Dan’s boss and frequent antagonist. Ned Romero as Sgt. Joe Rivera and Ena Hartman as administrator Katy Grant round out the cast in an era when racial diversity was not common in primetime.

But Burt is, of course, the main attraction. As a cop barely out of his 20s, August advocates for younger characters and gives voice to their concerns — a sea change for the older-skewing cop show format of the day. While Dan August is no Mod Squad, and Reynolds’ tightly wound hero was hardly counterculture, there was a clear effort to tailor stories to viewers who today might be described as “woke.”

Though Reynolds was nominated for a Golden Globe, Dan August was canceled by ABC after a single season. But the story doesn’t end there. According to production manager Howard Alston, the show’s editors assembled a blooper reel demonstrating how charming Reynolds could be when he lightened up.

“Burt took that gag reel, he went on these talk shows, and he changed his whole career,” Alston remembered. “He had this whole personality change in front of the camera as a result. He became a motion-picture actor on the basis of that gag reel!”

It may have happened after the show ended, but Dan August became Burt Reynolds’ big break after all. Here’s a guide to our August in August binge on August 31.

When a college president ends up dead, Dan and Charlie have an entire campus worth of suspects — including John Ritter as a double-dealing activist and Richard Basehart (Voyage To The Bottom Of The Sea) as a popular but controversial teacher. Will the rabblerousing professor light the match on a student protest before the cops can solve the case?

This December, 1970 episode was the first featured TV role for Ritter, the 22-year-old son of actors Tex Ritter and Dorothy Fay. We dare you to watch and not expect Audra Lindley to wander in wearing a caftan.

The wife of a hot-headed Assistant District Attorney (Monte Markham) is murdered and Dan and Charlie are once again on the hunt for the killer. Suspects include a strung-out taxi driver (Martin Sheen) and the victim’s brother (Laurence Luckinbill), a politician with a secret.

Markham was one of the busiest TV actors of the era, with lead roles in The Second Hundred Years and The New Perry Mason. Sheen spent the first decade of his career on television before achieving movie stardom in Badlands (1973), The Little Girl Who Lives Down the Lane (1976), and Apocalypse Now (1979). Luckinbill is probably best-known today as Spock’s half-brother Sybok in Star Trek V: The Final Frontier (1989).

This episode also features one of one of the first gay bars in primetime TV history, according to the book Queer TV: Theories, Histories, Politics.

Dan and Charlie chase down suspects in a rape and murder investigation, including: the woman’s fencing instructor (Fernando Lamas, “Latin Lover” of 1950s musicals and father of Lorenzo Lamas); a paroled sex offender (Sal Mineo from Rebel Without a Cause); a travelling salesman (Jerry Douglas from The Young And The Restless), a peeping tom (Paul Hampton, songwriter for Johnny Cash and Elvis Presley), and a child molester (Tom Troupe). Also look for Oscar nominee and Emmy winner Ellen Corby (The Waltons) as the victim’s nervous landlady.

This episode gets the entire team out of the office and into the action, most notably Ena Hartman’s Katy as an undercover decoy. It also a great example of what Dan August does best: twisty procedurals with envelope-pushing, socially conscious themes.

A retired judge (Walter Pigeon from Forbidden Planet) driving with his son-in-law (Larry Hagman) shoots at another driver, killing him. The judge is convinced the other driver drew a gun on him, but evidence suggests he imagined it. Is he in the early stages of dementia? Or is he a victim of gaslighting?

When a priest quits the priesthood, is he still bound by the confidentiality of the confessional? That’s the dilemma featuring a young clergyman (Bradford Dillman, guest star on just about every TV show in the 1960s and ‘70s) who questions his vocation after he hears the confession of a serial killer.

Look for Donna Mills (Knot’s Landing) as the priest’s girlfriend (ahem) and James Best (Rosco on The Dukes of Hazzard) as the witness to an attempted murder in a church. This is another episode that undoubtedly raised eyebrows in 1971.

When the former secretary of a gubernatorial candidate ends up dead, the candidate becomes a prime suspect. And Chief Untermeyer (Richard Anderson) actively impedes the investigation when Dan tries to bring the powerful man to justice.

With a story by Howard Dimsdale — a survivor of the infamous Hollywood blacklist of the 1950s — The Manufactured Man is one of the series’ best episodes. If you can only catch one episode of Dan August on August 31, be like Burt and jump on this one!

Six episodes of Dan August air Saturday, August 31 starting at 1p ET. And the series continues in its regular timeslot, Saturday nights/Sunday mornings at 4a and 5a ET. For more information, visit the getTV schedule.