Don’t Miss the HOT IN CLEVELAND Marathon on getTV! 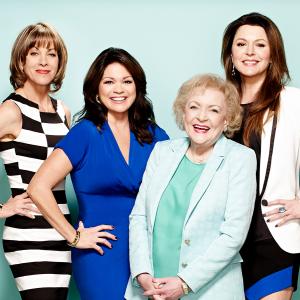 The temperature may be cooling down, but getTV is heating up with Hot In Cleveland every weeknight at 6p ET. The Emmy-nominated sitcom is still new to our schedule, but viewers have told us it’s already one of their favorites. And you can see why as getTV presents a seven-hour Hot In Cleveland marathon on Saturday, October 12 starting at 1p ET!

Valerie Bertinelli (One Day At a Time) stars as divorced writer Melanie Moretti, whose book 200 Things Every Woman Should Do Before She Dies inspires a girls’ trip to Paris that gets sidetracked in Cleveland. Wendie Malick (Just Shoot Me) plays Victoria Chase, self-involved star of “Lifetime original movies” and the recently cancelled soap Edge of Tomorrow. Jane Leeves (Frasier) is Joy Scroggs, short-fused make-up artist and “Eyebrow Queen of Beverly Hills.” And Betty White is Elka Ostrovsky, the hippest senior west of Brooklyn.

From the 2010 pilot episode to the epic reunion of Mary Tyler Moore Show cast members, fourteen of the best episodes have been selected by getTV’s programmers. Whether you’re a longtime fan or a Cleveland convert, this marathon is for you! Here’s a preview — with airtimes so you won’t miss a Hot minute!

Hot In Cleveland begins and ends with a plane trip. (And no, we won’t spoil the finale.) In the pilot, Melanie, Victoria and Joy “crash land” in Cleveland, Melanie falls for a local plumber (John Schneider), and the ladies rent a house together. Pilots often struggle to define characters and relationship dynamics, but this one has it figured out from the get-go. Fun fact: this episode was directed by Michael Lembeck, who played Valerie Bertinelli’s brother-in-law on One Day At A Time.

Melanie, Victoria and Joy finally get access to Elka’s guest cottage, where they discover a secret she’s kept for decades. We won’t tell you what they find, but it lands Elka in prison. This episode also features soap icon Susan Lucci’s first appearance as a (we hope) very exaggerated version of herself.

Season two picks up where season one left off, with Elka now behind bars! Her cellmate is 74-year-old Mary Tyler Moore, who had cast Betty White on her own iconic sitcom in 1973. Betty’s role as “neighborhood nymphomaniac” Sue Ann Nivens on The Mary Tyler Moore Show was originally intended as a one-time guest spot, but viewers liked her so much she ended up staying for four seasons and winning two Emmys! Mary would make one more appearance in Cleveland (see below).

One of Cleveland’s best running gags is Victoria’s competitive rivalry with Susan Lucci. In this two-part episode, Victoria returns to L.A. for a guest spot on All My Children — which Lucci hilariously sabotages. Look for AMC stars Michael E. Knight (Tad) and Darnell Williams (Jessie). Peri Gilpin also reunites with Leeves 18 years after they first worked together on Frasier.

Season two concludes with yet another Elka cliffhanger. The ladies wake up the morning after Elka’s bachelorette party with no memory of the night before, and spend the entire episode trying to fill in the blanks. And when Elka finally walks down the aisle to marry nice guy Fred (Buck Henry), complications ensue in the form of Don Rickles, Dick Van Patten and Carl Reiner. Look for some great slapstick from Valerie Bertinelli as Drunk Melanie.

Season three picks up with Elka dealing with the aftermath of her wedding ceremony. And Victoria goes on a morning talk show hoping to score a new gig as one of the panelists, only to be upstaged by Elka and her relationship woes. Kathie Lee Gifford does a hilarious spoof of her host personality and Don Rickles guest stars as a key figure from Elka’s past.

When Melanie’s “magic dress” goes missing and ends up on a dead woman, she and the others crash a funeral to look for it. “I crash funerals all the time,” Elka says. “To meet men!” Look for Orson Bean (Mary Hartman, Mary Hartman) as a mourner and John Mahoney(Frasier) as Elka’s on-again, off-again suitor Roy. Fun fact: Wendie Malick’s character married John Mahoney’s Martin Crane in the finale of Frasier, which made her the mother-in-law of Jane Leeves’ character.

The ladies get Botox treatments from their celebrity doctor, only to discover that his assistant/girlfriend — the “gateway friend” who scores them appointments — has broken up with him. Kristin Chenoweth (The West Wing, Glee) guest stars along with Jonathan Silverman (Weekend at Bernie’s) as the dermatologist. This episode mercilessly mock L.A. shallowness, and Betty White has the most memorable line: “I’m proud of my wrinkles; I earned every line.”

“I hope you guys show some of the blooper episodes, because those were a lot of fun,” Valerie Bertinelli told us recently. Valerie’s wish is our command! This 2012 special documents the entire production process, from rehearsal to taping before a live studio audience! “The audience is really the finishing touch,” Betty says in the show, and Valerie agrees. “Being able to talk to them between set-ups on show night always (makes it) such a fun night,” she told us.

Frequent co-stars Carol Burnett and Betty White reunite on this season four episode, along with The Carol Burnett Show co-star Tim Conway. The ladies visit Victoria’s hometown and her possibly senile mother (Burnett) and bitter sister (Jean Smart of Designing Women). Carol and Betty had previously played sisters Eunice and Ellen Harper in the “Family” sketches on Carol’s variety show beginning in 1975, with Betty reprising the role on Mama’s Family.

Hot In Cleveland staged reunions with many former co-stars, but they saved the best for season four. Mary Tyler Moore, Valerie Harper, Cloris Leachman and Georgia Engel reunited with Betty White in 2013 — 40 years after she joined the cast of The Mary Tyler Moore Show. In this episode, the MTM cast members play members of a bowling team working out four decades of personal issues. This is an extraordinarily touching show, with numerous references Mary Tyler Moore fans will appreciate. And it’s made even more poignant by the recent death of Valerie Harper.

The Hot In Cleveland marathon starts Saturday, October 12 at 1p ET! And don’t miss the series in its regular timeslot: weeknights from 6–8p ET. For more, visit the getTV schedule.