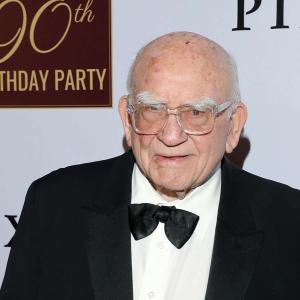 It’s not every day that a living legend turns 90. So, when we heard that seven-time Emmy winner Ed Asner was celebrating his 90th birthday with a gala benefit at a historic Hollywood landmark, getTV just had to be there!

On November 3rd, more than 400 of Asner’s friends and colleagues gathered at the Hollywood Roosevelt Hotel — site of the first Academy Awards — to celebrate the life and career of the TV icon. But the evening also had a greater purpose: to benefit special needs children and their families via the Ed Asner Family Center, co-founded in 2018 by Ed’s son Matthew Asner and daughter-in-law Navah Paskowitz-Asner. Three of their six children are autistic, and Ed also has a grown son on the autism spectrum.

“He didn’t have this for his own son when he was struggling,” Paskowitz-Asner told us. “We want to help people who are just coming into this community and feel like they don’t have support.”

Matthew Asner agreed, adding that his father’s choice to make a commitment to this cause is “the most important decision of his entire life.”

Tom Bergeron, host of Dancing With The Stars, served as emcee for the festivities. He told us he met Asner in the late 1980s when the actor was a guest on his Boston-based talk show. They’re both “grayer” now Bergeron joked, but they’ve remained close — and share a commitment to the evening’s cause.

“The goals of the Family Center are amazing and laudable: to keep families together and to provide resources for families that have unique stressors they have to deal with, so I think it’s great that we support it,” Bergeron said. “Plus, Ed has some very incriminating photos of me that I was worried he would release.”

That mix of reverence and occasionally bawdy humor informed the entire event, as it does the man himself. But one thing was constant: while they might tease him, Asner’s friends and colleagues share a deep affection for the actor that has endured, in many cases, for decades.

Maureen McCormick, an icon herself for The Brady Bunch, shared a memory of her 1979 guest appearance on Lou Grant, the dramatic spin-of The Mary Tyler Moore Show.

“I always get nervous, and right away he put me at ease. It was one of the most beautiful experiences in my career,” McCormick remembered, flashing that trademark Marcia Brady smile. “He’s one of the good ones. He’s a gem. He’s a treasure.”

Ed Begley Jr., an actor, activist, and eight-time Emmy nominee (seven for St. Elsewhere), recalled meeting Ed when they worked on a BBC miniseries Not A Penny More, Not A Penny Less thirty years ago.

Producer Jonas Rivera and director Pete Docter told us about working with Asner on Up (2009), the Oscar-winning animated film in which he voices an elderly widower whose life is changed by an optimistic young boy.

“He was a great guy to work with,” Docter recalled. “Hardest working guy we’ve worked with. He does not stop. If he senses the work’s not done, he’s there until it is done.”

Rivera added: “He puts his money where his mouth is. He’s an activist, a champion of everybody, and he’s a gentleman. For us it was this great gift to work with yesterday’s Hollywood a little bit but bring that forward."

Star Wars icon Mark Hamill shared a story of hanging out on The Mary Tyler Moore Show set while he was working on the short-lived, MTM-produced sitcom The Wheeler Dealers early in his career. Years later, he and Asner worked together voicing animated characters on shows like Spider-Man: The Animated Series.

“I’ve never worked with him on-camera, but I’ve done over a dozen animated projects with him,” Hamill told us. “He always plays the truth, whether he’s on-camera or off-camera.”

The evening also included rousing musical performances by Grammy winner Darius Rucker, Steve Lukather of Toto, and singer-songwriter Jackson Browne, who first met Asner while the two men were serving as election monitors in Nicaragua. Ed’s sixty-year career was celebrated with a montage of clips stretching back to his earliest appearances on shows like The Outer Limits. But the centerpiece of the evening was an old school celebrity roast, where Ed’s friends took the stage to share jokes and stories about his honesty, boundless energy, and passion for the craft of acting.

Patricia Richardson (Home Improvement) met Asner six years ago when they served on the board of SAG-AFTRA but told us that his impact on her career began decades earlier. She said Mary Tyler Moore was her “favorite show” and the first sitcom she ever saw filmed back in 1977.

“If anybody asks him to do something, he’s there. He just works and works and works, even if it’s a little two-day part. He is so generous with his time and he never stops. I am so impressed with that,” she said. “He’s like the Energizer Bunny.”

Richard Kind (Mad About You, Spin City) has worked with Asner on stage and radio, but he told us Ed’s influence on him began years earlier when he was a struggling New York actor watching late night reruns of The Mary Tyler Moore Show.

“It was the best there ever was. They were all the best they could ever be, and it was a confluence, a perfect storm of talent: actors, writers, directors, the times. It was perfect,” he said. “I wouldn’t be the actor I am today unless I was raised on him. He’s the actor you aspire to be.”

Brad Garrett, a three-time Emmy winner for Everybody Loves Raymond, told us he learned from Asner by watching him play Lou Grant and “probably stole a little from him.”

“I don’t know anybody who isn’t an Ed Asner fan or a Mary Tyler Moore fan,” he said. “That’s how I got turned on to Ed’s incredible talent. They say you have to be careful when you meet your heroes. But with Ed, you didn’t have to be."

But the highlight of the night for us was when the man of the hour took a minute to chat with getTV. He mourned the absence of Mary Tyler Moore, Valerie Harper and Georgia Engel, and jokingly credited Cloris Leachman’s and Betty White’s longevity to his “effulgent personality.” He also gushed about his 2012 reunion with Betty on Hot In Cleveland, which he called a “delight.”

“I think she is a delicious broad,” Asner told us in his inimitable style. “I think she’s wonderful, tremendously talented and has a great sense of humor. I delight that we’re friends and that I’m always pleasured to be in her company.”

And best of all, getTV is proud to present Ed Asner’s episode of Hot In Cleveland on Friday, November 15 at 7:30p ET in honor of his 90th birthday!

“I absolutely loved working with him,” Hot In Cleveland star Valerie Bertinelli told us. “Ed is such a rascal!”

Asner closed his unforgettable 90th birthday party with an entreaty to support the Ed Asner Family Center and a cheeky word of advice: “Do whatever you can to stay regular.” It was the perfect end to an evening that was as funny as it was touching — and a reminder that Ed Asner is, was, and always will be a “rascal.”

“He’s still the same,” fellow living legend Cloris Leachman said of her co-star and friend for half a century. “Same guy. Same Ed.”

getTV celebrates Ed Asner with a special episode of Hot In Cleveland on Friday, November 15 at 7:30p ET on getTV. To learn more about the Ed Asner Family Center, visit their website.