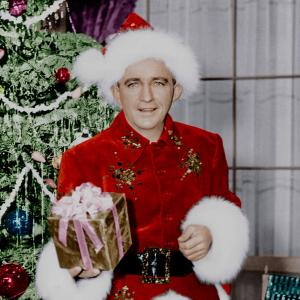 What’s your favorite Christmas memory? For many of us, it’s gathering with loved ones to watch holiday-themed specials on television. It wasn’t truly Christmastime until classic stars like Bing Crosby graced our living rooms singing songs of the season with famous friends. The TVs may have been smaller back then, but the performers were larger than life.

If you miss those days, getTV is the place to be this Black Friday!

On the day after Thanksgiving, we’ll open the vaults for a full day of classic Bing Crosby specials from the 1970s — many un-seen since their original broadcasts more than 40 years ago! The Black Friday White Christmas 24-Hour Marathon kicks off Friday, November 29 at 6a ET with Bing Crosby and the Sounds of Christmas (1971) and continues until Saturday morning at 6a ET. Along the way, we’ll present seven specials, featuring familiar faces like Fred Astaire, Jackie Gleason, Michael Landon, Sally Struthers, Robert Goulet, Connie Stevens and — in an iconic duet from Bing’s final special — David Bowie.

Of course, all of the specials feature Bing crooning his signature song: “White Christmas.” Crosby’s association with this Irving Berlin standard stretches all the way back to 1941 when he sang it on a holiday broadcast of The Kraft Music Hall on radio. He recorded it for Decca Records in 1942, sang it with Marjorie Reynolds in Holiday Inn (1942), and turned it into the title song of the film WHITE CHRISTMAS (1954). Today, “White Christmas” remains the best-selling single of all time, with more than 100 million copies sold. Crosby’s version is estimated to account for half of that.

The man born Harry Lillis Crosby ruled movies, radio, and records for a quarter of a century beginning in the early 1930s. His tradition of annual Christmas broadcasts stretched all the way back to his radio days, where he celebrated the season every year from the mid-1930s until 1962. Bing’s holiday shows moved to TV in the early ‘60s, before taking up residence on The Hollywood Palace (where he was a frequent guest host) in 1965. It was on that ABC variety series that he began including family members: second wife Kathryn Crosby, daughter Mary Crosby (billed as Mary Frances) and sons Harry Crosby and Nathaniel Crosby. (Bing’s sons from his first marriage had also appeared on earlier holiday broadcasts).

Bing’s brood — affectionately referred to as “Casa Crosby” — is a talented bunch. Kathryn was a singer and actress who met Crosby on the set of White Christmas (1954) two years after the death of his first wife Dixie Lee. Kathryn stepped away from performing when she married Bing in 1957, but she was familiar to audiences of the 1970s as a frequent co-host on The Mike Douglas Show and her own talk show. Mary Crosby had appeared on programs like The Danny Thomas Hour and would go on achieve international fame in 1980 as Kristin Shepard on Dallas, the answer to the cliff-hanging question, “Who shot J.R.?” And Harry was a trained musician and guitarist. Only Nathaniel had an uneasy relationship with performing. “I had a jock image at school,” he told the The Salt Lake Tribune in 2014, explaining that classmates would tease him. “And 13 or 14 fistfights later, I would resolve the crisis.”

Like the Perry Como holiday shows, each Crosby Christmas special has a unique theme and guest stars. But you can always predict the closing number: “White Christmas.” So, get your holiday cardigan out of mothballs, cue the artificial snowflakes, and join us for these rarely rerun gems!

Here’s a look at the specials airing on getTV Friday, November 29.

Originally broadcast on December 14, 1971, Sounds of Christmas features Tony Award-winner Robert Goulet, opera singer Mary Costa, and the Mitchell Singing Boys choir. Goulet demonstrates his booming baritone on “Do You See What I See” and in a duet with Costa of “O Holy Night.” Costa shows off her soprano stylings on “Carol Of The Bells” and in a comedic medley with Bing. And the Cosby family sings a delightful rendition “Home For The Holidays.” The kids also get nice showcases, with Mary dancing the "Dance of the Sugar Plum Fairy” and Harry (on guitar) accompanying Bing on “Chestnuts Roasting On An Open Fire.” (November 29 — 6a, 1p, 8p and 3a ET)

This ambitious special, originally broadcast on December 10, 1972, uses a Christmas caroling motif to introduce inventive sequences of song and dance featuring guest stars Sally Struthers, David Hartman, and dancer Edward Villella. Hartman, who made his Broadway debut in the original production of Hello, Dolly in 1964, shows off his singing chops in a medley from Scrooge (1970). Struthers, then in her second season as Gloria on All In The Family, joins him for a musical take on The Gift Of The Magi. And Bing closes the show by leading the ensemble in a fireside rendition of “White Christmas.” (November 29 – 7a, 2p, 9p and 4a ET)

You’re pretty much guaranteed of a white Christmas in Sun Valley, Idaho, so Bing packs up the family for a holiday road trip with guests Michael Landon, Connie Stevens and John Byner. Landon croons John Denver’s “Season Suite: Winter,” harkening back to his brief career as pop singer in the early 1960s. Stevens sings Harry Nilsson’s “Remember (Christmas).” And comedian and impressionist Byner does a killer Crosby impression (among others). Landon even parodies his Western persona in “The Ballad of The Christmas Star.” (He had completed his 14-season run on Bonanza earlier in the year.) The show concludes with a medley of Christmas carols ending with…guess what? (Friday, November 29 – 8a, 3p, 10p and 5a ET)

The Crosbys return to the studio for this special, originally broadcast on December 15, 1974. With bridging segments.

With bridging segments set in Bing’s study, this inventive show offers fully staged musical sketches, featuring singer/actor Mac Davis, Karen Valentine (Room 222), Kathryn and the kids. The final segment continues the practice of the family teasing Bing about his insistence on singing “White Christmas” on every special. In just a few short years, the Crosby kids had graduated to fully fledged sketch performers, singing and dancing with confidence. But fair warning: they all look like they’ve aged five years since the last show! (November 29 — 9a, 4p, 11p ET)

Thirty-three years after they shared the screen in Holiday Inn (1942), Bing and Fred Astaire reunite for this special, originally broadcast on December 3, 1975.  The premise: Seventy-six-year-old Astaire and Bing (age 72) are teaming up once again to record an album. The hour is devoted to them testing out tunes, from old favorites to contemporary pop hits. The teen choral group The Young Americans is also on hand to provide some youth appeal. And there’s a surprise appearance by an old friend of Bing’s who’s sure to bring back a memory or two. (November 29 – 10a, 5p and 12aET)

The Crosby kids were well into their teens by 1976 and this special, broadcast on CBS on December 1, acknowledges that. Mary (age 17) seeks career advice from Tony Award nominee Bernadette Peters (who was then starring in the sitcom All’s Fair). Eighteen-year-old Harry dreams of a record deal. Future pro golfer Nathaniel (age 15) focuses on his golf game. And the kids take center stage for a Disco variation on “Jingle Bells.” There’s also a tribute to lyricist and songwriter Johnny Mercer, who died just days before the show was taped. But the highlight of this show is Jackie Gleason, who sings, dances and tells jokes like only The Great One can.  (November 29 – 11a, 6p and 1a ET)

This bittersweet special was recorded in September of 1977 in England, where Bing and his family had just completed a tour that included a two-week run at the London Palladium. A few weeks later, on October 13, 1977, Bing suffered a heart attack and died on a golf course near Madrid, Spain. The family decided the show should go on, and Kathryn does a brief intro explaining how much Bing enjoyed doing it. Guests include actress/singer Twiggy, Oliver! (1968) star Ron Moody, and impressionist Stanley Baxter (who plays multiple roles, parodying characters on Upstairs, Downstairs). But the iconic moment from this program is Bing’s duet of “Peace On Earth/ Little Drummer Boy” with David Bowie, which has since become a holiday standard. “Until next time,” Bing says to the audience, as he sings “White Christmas” for the last time. Have tissues standing by. (November 29 – 12p, 7p and 2a)