getTV talks GUNS OF PARADISE — An Interview with Sigrid Thornton 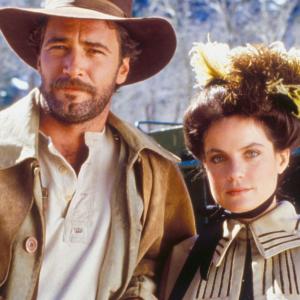 By 1988, primetime soaps like Dallas and Knots Landing had been drawing large, loyal audiences for a decade. So, it’s not surprising that CBS turned to David Jacobs, the mastermind of those two hits, for a sudsy spin on the Western genre. The result was Guns of Paradise, a unique hybrid of Old West action, family drama, and will they/won’t they romance — seen weekdays at 4p ET and weekends at 3p ET on getTV!

Lee Horsley stars as Ethan Cord, a professional gunslinger who becomes a reluctant caretaker to three nephews and a niece when his sister dies. For the role of prickly banker Amelia Lawson, Chase tapped Sigrid Thornton, already a soap opera veteran in her native Australia. Thornton had appeared in the controversial Prisoner: Cell Block H and continues to work in serialized drama today, with a recent role on Wentworth, a primetime reimaging of Prisoner. She currently stars in SeaChange on Australia’s Channel Nine (and available internationally via streaming).

For the inside scoop on Guns of Paradise, we recently chatted with this icon of the Australian screen from her home in Melbourne. The following are highlights of that conversation, edited and condensed for space and clarity.

How did you get cast in Paradise?

I received a call from [series creator] David Jacobs at my home in Melbourne, and he said to me, “You’re the person I want to play this role. She’s an Australian because of you and your work. Will you do it?”

I had received a script, but I hadn’t read it yet. So, I sort of scurried back and had a good think about it [LAUGHS] and thought, “Wow, what an amazing opportunity, what a wonderful honor and privilege.”

What had he seen you in?

David knew my work from The Man From Snowy River and All the Rivers Run, which was a miniseries that HBO picked up. He must have seen something in that work that fit.

Were you aware how popular his shows were in the U.S.?

I was aware of Dallas much more than Knots Landing. I knew David was a major producer and I knew we were going to be working for a major studio. But I must confess I didn’t really have a broad understanding of the television landscape in the United States.

Were you nervous about a potential move across the world to do Paradise?

I had a three and a half-year-old son and I thought to myself, “I’ll go to the states and twenty-to-one chance it won’t go any further.” So, I went, and it got picked up! What started out as a sort of miniature adventure became a major chapter in my life.

Was working in Hollywood a culture shock, compared to Australia?

The nuts and bolts of making film and television are exactly the same wherever you go, but the scale is different in the US. Paradise, for me, was a massive scale production. I just had to feel my way, take it one day at a time.

“Fancy woman, brash man” is a familiar Western dynamic. Did you go in thinking, “I need to fit into a trope?” Or did you feel free to create?

Yes, she’s a trope, but she’s my trope! We used to joke that the show was a cross between Gunsmoke and Little House on the Prairie. It was kind of a reinvention of the classic material, because it introduced a hard edge into that family environment. My function was to soften the hard edges of that character [Ethan] and to bring his heart out.

I was going to ask your favorite episode, but instead I’ll tell you mine.

Yes, please. I should have watched the whole show again, to have been better researched for our discussion! [LAUGHS]

That’s okay. I watched it for you. My favorite is “Founder’s Day,” where Amelia shoots and kills a young thief.

That was a pivotal episode. And it’s one of the ones I remember extremely well. There was a real understanding of the layers of the onion by the Paradise writers. And I think that they gave that to Amelia, and that’s a gift for any actor.

Did you ever have a conversation with the writers about character development?

This was a passion project for David, so he was very engaged and involved with us. The extent to which the lead actor had control in the writer’s room was much greater than it would have been in Australian television. It was no comparison, particularly for somebody like Lee, who was a star.

How did you get along with Lee Horsley?

I could not have hoped for a more divine human being to work with. Just a sweet, sweet-hearted man, really. Generous to a fault, open, friendly, all of the things I would have wanted. The lead in the show holds a fair bit of responsibility in setting the tone on the set, and Lee just set such a fantastic tone.

Oh, he’s just gorgeous. And he was loving what he was doing as well. We both loved the work, loved the job that we had. It really was a wonderful shoot. We had a beautiful cast and crew and we had children on the set every day. Children make people smile and laugh. And because we had a crew that matched that energy, we were able to have this really friendly, familial experience.

Paradise is a Western with the DNA of a soap opera. Do you think that confused some viewers at the time?

It’s not something I’d considered, and it’s a very good point. It had a strong female lead and was inviting that female audience in a different kind of way to the Western genre. And that’s why I think it was, to some extent, ahead of its time. And, because Amelia was a foreigner, a divorcee, independent of mind, the push/pull romance thing was more credible.

You mentioned the child actors (Matthew Newmark, Jenny Beck, Brian Lando and M.P Carter). It’s always risky when you cast kids, but they were solid.

When you’re a child actor, which I was too, the influence your parents have on the set is very important. They were all very well looked after from that point of view. They weren’t intimidated by their environment, any of them. And they were all really well-cast. They were disciplined actors. I never felt there was any cutesy going on.

You had a particularly good rapport with Jenny Beck, who played Claire.

Beautiful girl. Jenny had this kind of beautiful innocence, but sort of an old soul as well. Even at a very young age she was maternal. They had this familial connection from the word go. It was very instinctive. They were instinctive actors.

You dodged so many cancellation bullets on Paradise. Do you remember when you got the word that it was finally over?

Yes, I do. It was really, really sad because we loved each other, and we loved working on Paradise. I had a second child soon after that, so my life kind of went in a new direction. The producers were happy to build a pregnancy into the show, which would have been fantastic. I think we could have sustained that show for a lot longer.

You’ve appeared in updates of two of your old shows recently: Prisoner and SeaChange. How about Guns of Paradise?

Do you think Ethan and Amelia ended up together?

I like to think they did. There was a really deep connection between the two of them. What do you think?

I think they did. And, when the kids grew up, Amelia convinced Ethan to get the hell out of that town.

To get the hell out of Paradise, as it were! [LAUGHS]

Exactly! How does it feel to know that people are still discovering the show 30 years later?

I’m so gratified to know that there’s this growing audience for Paradise even to this day. It’s extraordinary, it’s wonderful. From my heart, my best wishes to all of you over there.