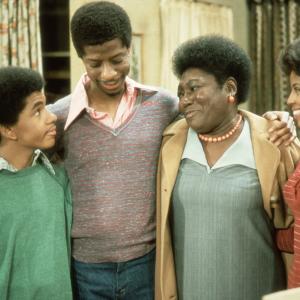 Who’s the true star of Good Times? Your answer may depend upon when you started watching the series – and how old you were at the time.

If you discovered the Norman Lear-produced sitcom in the latter years of its original network run, or in after-school reruns, you might say Jimmie Walker. As oldest child J.J., Walker was Good Times’ breakout star and the series rode his “Dy-No-Mite” catchphrase to the top of the ratings. Walker’s comedic instincts are flawless, and his antics were like catnip to younger viewers.

But revisiting Good Times on getTV forty years later, many are developing a new appreciation for Esther Rolle as Florida. As the fiercely protective mama bear of the Evans family, the veteran actress provides many of the series’ most memorable moments.

Rolle was one of the founding members of the Negro Ensemble Company in the 1960s, and she brings the depth of her stage training to her performance as Florida. She manages to find compelling truth in even the most standard sitcom plots, and it’s this resonance that has helped Good Times endure. Catchphrases come and go, hairstyles and fashions change, but emotional relatability never goes out of style. In Florida, we see our mother, our grandmother, or maybe even ourselves.

Here’s a look at ten of Esther Rolle’s best episodes:

Florida feverishly cleans the apartment in the hopes of winning a prize for the nicest home in the projects. But socially conscious Michael complicates matters when he decides today is the day to help his fellow man – and he brings home Ned the Wino (Raymond G. Allen). Watch for how the show occasionally struggles to find its voice in early episodes, and how broadly the actors play their characters.

Florida is scouted by a talent agent with a promise to become the spokesperson for a new health tonic. When he sends over a sample, the Evans family discovers where “Vita-Brite” gets its brite-ness! This episode evokes earlier sitcoms, as Florida gets nervous about being on TV (like Ralph Kramden on The Honeymooners) and the family gets drunk on the product she’s endorsing (like Lucy Ricardo with Vitameatavegamin). But Rolle can elevate even the most traditional of sitcom tropes.

Florida and Willona (Ja'net DeBois) have two very different responses to a wedding invitation from a friend: Florida buys a new dress, but Willona decides to stay home. The reason: she’s divorced, and doesn’t want to deal with peer pressure. “There’s a big difference between being alone and being lonely,” she tells Florida. This episode is a good example of one of Good Times’ secret weapons: the dynamic between Rolle and DuBois.

Florida wants to go to night school, but James (John Amos) balks. One of the treats of Good Times is the snapshot of 1970s life it provides, and this episode is a great example of the evolving relationship dynamics of the era. Also: Willona’s comeback to James is a perfect example of how the series had found a confident, socially aware voice by season two. And look for Sanford And Son’s Hal Williams as James’ friend Willie.

James and Florida celebrate their 20th wedding anniversary in a vacation cabin, but things don’t go according to plan. It’s important to remember that Amos and Rolle were the leads on Good Times for half its run. By this point, they had developed effortless chemistry, and this episode is one of the most charming of the series.

Florida throws a shower for her friend, who’s actually planning to give up her baby for adoption. Mary Alice (an Emmy winner for I’ll Fly Away) gives a touching performance in an episode that balances a heavy plot with door-slamming farce. Look for Vivian Bonnell as Florida’s friend Cora; she makes another appearance a year later as a different character.

When the family gets food poisoning, Florida and Willona lead a supermarket protest that turns violent. They both end up in jail, where DuBois and Rolle have a nice Lucy-and-Ethel set piece. Look for Nedra Volz (Diff’rent Strokes) as a feisty old lady who shares their jail cell and Fred D. Scott (Sanford And Son) as a food inspector.

When her new boss invites her out for a sushi lunch, Florida inadvertently gets drunk on saki – and James gets jealous. Florida’s boss is played by Thalmus Rasulala, who was in pretty much every TV show and movie in the 1970s (including two appearances on Good Times and two on Sanford And Son.) “Womens’ Lib don’t mean we want to stop being women,” Florida tells James. “It just means we want our chance in this world too!” Ah, the ‘70s.

After a year away, Florida returned to Good Times as a twice-widowed single mom. (Her second husband Carl dies off camera during season five.) Much of season six involves the character acclimating to life as the head of the family, and this episode is a powerful example. Look for 10-year-old Gary Coleman, a year before Diff’rent Strokes.

When one of Penny’s friends gets pregnant, Florida encourages Willona to tell her about the birds and the bees. Season six is certainly the most unique Good Times season, with an expanded supporting cast (including the hilarious Johnny Brown as Bookman). But one high point is the reestablishment of Willona and Florida’s friendship. Their relationship  gives the series some of its most genuine moments.

For airdates and times, visit the Good Times show page.