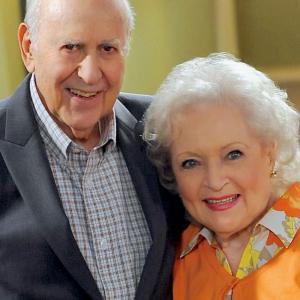 “There are so many amazing guest stars!” Valerie Bertinelli told the getTV blog when we asked her about memorable moments from Hot In Cleveland — now on getTV every weeknight. “We would always get the best people!”

Hot In Cleveland originally aired in the 2010s, but it has the heart and soul of a classic. Bertinelli (One Day At A Time) stars as Melanie, along with Wendie Malick (Just Shoot Me) as former soap star Victoria Chase, Jane Leeves (Frasier) as British make-up artist Joy Scroggs, and Betty White (Mary Tyler Moore, The Golden Girls) as their caustic “caretaker” Elka. The series also features a ton of iconic guest stars, creating a classic TV “multiverse” in which almost everybody in the cast is a familiar face.

“I think that's what people fell in love with, besides the great writing,” Valerie told us. “You feel like ‘I’ve been with these people before.”

Hot In Cleveland became cable’s top-rated sitcom in its original run on TV Land, a channel programmed (at that time) with vintage reruns. Creator Suzanne Martin (a two-time Emmy winner for Frasier) used the show’s unique status — as a contemporary series in a classic landscape — to create one-of-a-kind reunions: including Bertinelli with her One Day At a Time castmates. Not surprisingly, Valerie counts those shows among her favorites.

“That will always be a gift to me, that Bonnie (Franklin) and Pat (Harrington) were there before they left us, that I was able to work with them one last time, and Mackenzie (Phillips),” she told us. “I started my career working with Bonnie, Mackenzie, and Pat and learning from them.”

Here are a few reunion episodes to look for on getTV. But never forget Valerie Bertinelli’s advice when we asked her favorite episodes: “Every show is so good and so much fun. I would suggest not to miss any of them!”

Valerie told us that the annual “birth dates” episodes — where the ladies set each other up on dates on their shared birthday — were also favorites. “So many great actors did so many funny things,” she said of the suitors. The first of those is Carl Reiner (The Dick Van Dyke Show) as Max, an older gent whom Melanie finds at a local senior center. Betty and Reiner also worked together on Boston Legal in 2005 — reunited again in 2019 as voice actors in Toy Story 4!

Bertinelli was 15 when she was cast as Barbara Cooper on One Day At A Time in 1975. Franklin was just 16 years older but took on a parental role. “Bonnie has always been one of the most important women in my life and was a second mother to me,” Valerie said of her TV mom, who passed away from pancreatic cancer at age 69. This 2011 episode lampoons the ladies’ real-life loving friendship, with Bonnie playing the mother of Melanie’s new boyfriend — a lady who is not a fan of Melanie!

Peri Gilpin won a SAG Award as Roz Doyle, the producer of Frasier Crane’s radio call-in show, on Frasier. Leeves played Daphne, the caretaker to Frasier’s dad Martin Crane (John Mahoney, more on him later). Seven years after that series ended, Gilpin guest stars as Taylor, a shallow Los Angeles friend who lunches with the ladies when they’re “on the coast” for Victoria’s All My Children shoot.

The relationship between Martin and quirky Daphne was one of the best parts of Frasier. This episode — the second of the “birth dates” shows and another Valerie favorite — introduces John Mahoney as Roy, a waiter who coaches Joy on her date. Mahoney returned for five more episodes and is entirely different here than as the curmudgeonly Crane patriarch.

On Mary Tyler Moore, working-class Lou Grant had a notorious dislike for the predatory, snobbish Sue Ann. This episode flips that dynamic, with Ed Asner as wealthy Jameson Lyons, the snooty country club president who puts the moves on earthy Elka at the annual “Rubber Ball.

On Just Shoot Me!, Wendie Malick played an aging former model desperately holding on to the remnants of her past glory. On Hot In Cleveland, she plays an aging former soap star desperately holding on to…you get the picture. In this episode, David Spade guests as a smarmy hairdresser who bears some striking similarities to Dennis Finch, the smarmy secretary he played on Just Shoot Me!

Pat Harrington Jr. was a comedian turned actor who won an Emmy as building superintendent Schneider on One Day At A Time. “He turned out to be the comic strength of the show,” producer Norman Lear once said. In this episode — the final TV appearance of his 65-year career — Harrington plays a mustachioed building manager named Sherden. “You look familiar,” Melanie says to him, as she, Joy and Victoria try to break into an apartment.

One Day At A Time: Valerie Bertinelli and Pat Harrington Jr.

Hot In Cleveland saved the best reunion for season four, reuniting Mary Tyler Moore, Valerie Harper, Cloris Leachman and Georgia Engle with Betty in 2013 — 40 years after she joined the cast of The Mary Tyler Moore Show. The MTM cast members play members of a bowling team reuniting and working out four decades of issues. This is an extraordinarily touching episode, with numerous references Mary Tyler Moore fans will appreciate.

11. Valerie Bertinelli and Mackenzie Phillips — “About A Joy” (Season 6, Episode 11)

In her 2008 book Losing It, Bertinelli writes about her love for her One Day At A Time co-star Mackenzie Phillips — and how she often felt intimated by, and competitive with, her 1970s TV sister. In this episode, Phillips plays Kaylin, an older classmate who intimidated Melanie in their school days – another example of how Hot In Cleveland weaves truth and fiction into a funny and often touching narrative.

One Day At A Time: Mackenzie Phillips.

Hot In Cleveland airs Monday through Friday from 6–8p ET on getTV. Visit Valerie Bertinelli’s website (LINK: valariebertinelli.com) and connect with her on Twitter and Instagram