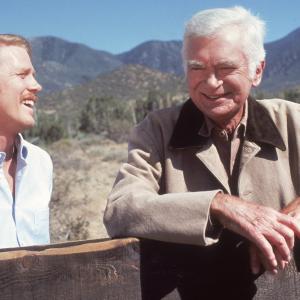 If you’re a classic TV fan, there’s a good chance you’ve run across the Opie’s Hobo Friend episode of Andy Griffith at one time or another. But it’s less likely that you’ve seen Ebsen and Howard’s only other co-starring vehicle, which has been hard to find since its original broadcast 37 years ago. Until now.

This month, getTV will bring Fire On The Mountain out of the vaults for two rare broadcasts: Sunday, November 4 at 12:30p ET and Saturday, November 17 at 7:40a ET. It’s a unique opportunity to see two classic TV icons work together, in a powerful film that will surely bring a tear to your eye.

Ebsen (The Beverly Hillbillies, Barnaby Jones) stars as an aging New Mexico rancher whose property borders a United States Air Force missile testing facility. The military brass plans to expand the White Sands Range, but John Vogelin stands in their way — with a loaded shotgun. Vogelin has lived on the property all his life, buried his parents there, raised a family there, and plans to live out his days there. And, despite frequent entreaties from military personnel, he rejects the government’s generous evaluation of his land and their offers to buy it. And that’s when things start to get ugly.

Howard plays Lee Mackie, a young neighbor/speculator who has bought other properties near the base with plans to re-sell them to the government. Mackie’s motivations are unclear, and Vogelin doesn’t trust him — especially when he reminds the old man that the government owns the mountain he calls “his.”

“The government claims to own it, but they ignore it,” Vogelin says. “I live on it and I love it.

Mackie is struck by the irony in John’s behavior. He’s fighting the government’s efforts to seize his property for purposes of “national security,” while engaging in his own version of eminent domain.

“The government stole (the mountain) from the Indians, and the Indians stole it from the eagles,” Vogelin replies. “In forty years, civilization will collapse and everything will be back to normal. I wish I could live to see it.”

Fire On The Mountain is based on a 1962 novel by Edward Abbey, an activist author who focused on environmental, political, and anti-authoritarian themes. Abbey’s novel is a fictionalized account of an actual incident, and it’s clear that Ebsen’s Vogelin speaks in the author’s voice. It’s also clear that Thieves Mountain represents more than just a plot of earth. It’s a birthright and Vogelin is prepared to fight for it, even to the death.

With its rural setting and horseback-riding heroes, Fire On The Mountain can definitely be considered a contemporary Western. But it’s far more of a character study, which is great news for fans of Ebsen and Howard. In 1981, both were coming off long runs as straight-laced heroes: Howard on Happy Days and Ebsen on Quinn Martin’s detective series Barnaby Jones. When Ebsen starts firing his rifle at American soldiers, you may wonder what Barnaby Jones would think! And Howard’s nuanced performance is a great reminder that he was more than just a cute child star who became an acclaimed film director. It’s fun to think about the compelling character actor Ron Howard might have become in his later years.

Fire On The Mountain was directed by Donald Wyre, a TV movie maestro who also helmed the ice skating classic Ice Castles (1978). It also features Rossie Harris (the kid in the cockpit in Airplane!) as Vogelin’s grandson, Julie Carmen (In The Mouth Of Madness) as his ranch hand/surrogate daughter, and Michael Conrad (Sgt. Phil “Let’s be careful out there” Esterhaus on Hill Street Blues) as a military man. It’s a film the whole family can enjoy — especially if your family loves classic TV!