Remembering Summers Past with EDDIE AND THE CRUISERS on getTV 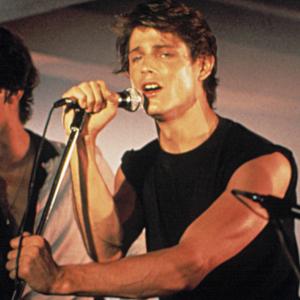 What were you doing in the summer of 1984? If you were a teenager, there’s a good chance you were watching Eddie And The Cruisers. The film about a 1960s singer who meets a mysterious end was on everybody’s mind that summer. Some of us even wore out our singles of “On The Dark Side” by John Cafferty and the Beaver Brown Band, the real rockers behind the Cruisers’ fictional hits.

Today Eddie And The Cruisers is one of the most beloved movies of the ‘80s. But the independently produced film was ignored by audiences in its initial theatrical release in 1983. A year later, however, the soundtrack was topping the Billboard charts and the film was on its way to becoming a cult classic. So, what happened? What changed?

Eddie And The Cruisers began life in 1980 as a novel by P.F. Kluge (Dog Day Afternoon), based on a summer he spent working for a small town newspaper in New Jersey. Kluge’s novel was a combination memoir and murder mystery, with a reporter investigating the life and death of a local rock star a generation earlier. The book was optioned by writer/director Martin Davidson, who had previously documented rebellious youth culture of the era in 1974’s The Lords Of Flatbush. Davidson’s screenplay transformed Eddie And The Cruisers into a musical Citizen Kane, set in the Xanadu of the Jersey Shore.

The film opens in the present day. Reporter Maggie Foley (Ellen Barkin) pitches a documentary about singer Eddie Wilson (Michael Paré), whose music is back on the charts thanks to a re-release of his band’s only album. The brooding frontman died tragically two decades earlier after he drove his car off a bridge. But guess what? Right before the crash, the Cruisers had finished their second album. And those recordings – rejected by the label for being too artsy – have been missing ever since.

Maggie’s investigation leads her to Frank Ridgeway (Tom Berenger), a high school lit teacher who was the band’s keyboardist and songwriter. In flashbacks, Frank recalls meeting Eddie, bassist Sal (Matthew Lawrence), drummer Kenny (David Wilson), sax player Wendell (Michael “Tunes” Antunes), manager Doc (Joe Pantoliano), and background singer JoAnn (Helen Schneider) in the summer of ’63. Back in the present, Frank’s home is ransacked, as is Doc’s and JoAnne’s. Somebody is looking for the lost album, but who?

As in Kane, the contemporary action serves as a bridging device for flashbacks where things really get interesting. Eddie, despite his working class background, desperately wants the Cruisers to be more than just a bar band. Frank, who he called “Wordman,” is just the guy to help him do that. But Frank falls for JoAnn, Eddie finds out, things get complicated, and Eddie ends up in the river. Or does he? No body is found, fueling speculation that he might still be alive.

Paré is excellent as the greaser who yearns to be something more. His performance is rough and unmannered, as if they hired a real rock singer to play the part. And unless you know (SPOILER ALERT!) he’s lip-synching to Cafferty’s tracks, it would never occur to you that he’s not singing. Berenger is perfectly believable playing himself as a teenager and as a man of nearly 40. Barkin is delightful as the tenacious reporter with her giant ‘80s eyeglasses and attitude. And Matthew Lawrence is especially on-point as Sal, pathetically invoking Eddie’s memory as the host of a cheesy nostalgia show at the Holiday Inn.

But the brilliance of Eddie And The Cruisers lies in its narrative diversity. It’s a mystery, a period piece, a music movie, a coming-of-age story, and a biopic. You want a treatise on aging and regret? Got it! How about a movie about sexy young rock stars gazing longingly at each other? Covered! That’s probably what captured the attention of us younger viewers during those “Wild Summer Nights” of 1984. Eddie spoke to a sense of aspirational longing that seemed genuine and timeless. And it didn’t hurt that the film had a totally rad soundtrack, a musical mash-up of the ‘60s and the ‘80s not unlike Dirty Dancing a few years later.

Like its protagonist, the second life of Eddie And The Cruisers was even more interesting than the first. The film played for just three weeks in September of 1983 before it was pulled from theaters by distributor Embassy Pictures. The following spring it began showing up in video stores and on pay cable. Buzz grew that summer and singles began to chart, long after the soundtrack had come and gone from stores. A music video for “On The Dark Side” – with Cafferty filmed in shadow and looking vaguely like Eddie – went into heavy rotation on MTV, and the song climbed to the top of Billboard’s rock chart. Scotti Brothers re-released the soundtrack and other singles followed, including “Tender Years.” In a little more than a year, Eddie And The Cruisers had gone from flop to phenomenon.

It’s common nowadays to see a piece of pop culture catch a good wind and become the talk of the nation overnight. But things moved more slowly 30 years ago. Word of mouth was literally that, and established methods of distribution, communication, and promotion ruled the day. But Eddie And The Cruisers demonstrated the impact an engaged fan base could have on something worthwhile that had gotten lost in the shuffle. In a sense, Eddie was one of the early “viral” hits, a preview of the world we live in today.

We saved Eddie And The Cruisers from being forgotten that summer, we proud members of the MTV Generation. Despite what our parents said, maybe all that TV we watched wasn’t a waste of time after all.