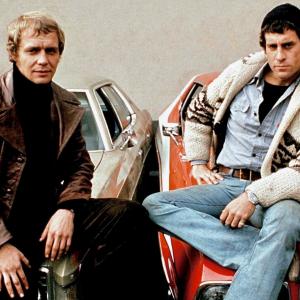 Once upon a time, we waited all week for our favorite shows. In between episodes, we carried the lunchboxes, collected the trading cards, and acted out our favorite scenes in the schoolyard. And when we got a bit older, we plastered pin-ups in our lockers and posters on our bedroom walls. TV may not have been as ubiquitous back then as it is now — If you missed your show, you missed it! — but it sure was fun.

If you remember those days fondly, getTV is the place to be in 2021. We’re throwing it back to the 1970s and ‘80s every night of the week with good, old fashioned TV comfort food — crime classics as fresh and exciting as they were in our younger days. Our new Crimetime lineup kicks off on January 18 with five hours of vintage action every weeknight:  Mike Hammer at 6p ET, Starsky & Hutch at 7p ET, two hours of Charlie’s Angels at 8 p ET and Hart to Hart at 10p ET.

And stay up late (or set your recorder) for your favorite classic sitcoms starting at 11p ET with All In the Family, followed by Sanford and Son at 1a ET and Good Times at 3a ET. Plus, you’ll get a second chance to catch the Crimetime shows on Saturday and Sunday late nights starting at 10p ET. Visit the getTV website for a full schedule — and to subscribe to our free monthly newsletter with exclusive content.

With his fedora, trench coat, and punch first, ask questions later attitude, Mike Hammer is a man out of time: a 1940s-style private eye in a 1980s world. That’s the premise of this gritty crime series, originally broadcast from 1984-1987. Emmy nominee Stacy Keach is our hardboiled hero, with Lindsay Bloom (The Dukes of Hazzard) as his loyal secretary Velda, Don Stroud (The Buddy Holly Story) as his cop friend Pat Chambers,Kent Williams (WarGames) as prickly Assistant D.A. Barrington, Danny Goldman (Young Frankenstein) as informant Ozzie the Answer, and Donna Denton as a mysterious brunette known only as “The Face.”

First introduced in the pages of Mickey Spillane’s novel I, The Jury in 1947, Hammer is one of crime fiction’s most iconic characters. Spillane made certain demands of producer Jay Bernstein before he would approve the TV adaptation, including filming on-location in New York City and the caliber of Hammer’s handgun: a .45 nicknamed Betsy.

Two Southern California cops fight crime in this 1975-79 series from creator William Blinn, an Emmy winner for Brian’s Song and Roots. Unofficially based on the two NYPD detectives depicted in The Super Cops(1974), Starsky & Hutch began life as a script for the ABC cop show The Rookies. Producers Aaron Spellingand Leonard Goldberg recognized series potential, and a pilot film scored high ratings in April of 1975. The series debuted that fall and was an immediate hit, earning a spot in the top twenty.

David Soul (Here Come The Brides) is top billed as Ken “Hutch” Hutchinson, a blond-haired divorcee who’s catnip to the opposite sex. Soul had been a singer in the ‘60s and returned to pop music during S&H’s run, scoring a hit with “Don’t Give Up on Us.” Brooklyn native Det. Dave Starsky is played by Paul Michael Glaser, a former soap opera actor (The Doctors, Love Of Life) who also appeared in Fiddler on the Roof (1971). The unofficial third member of their team is Huggy Bear (Antonio Fargas), a stylish snitch who operates a downtown watering hole. Bernie Hamilton rounds out the cast as the always-exasperated Capt. Dobey. The series boasts an all-star team of familiar faces, like Raymond Allen (Ned the Wino on Good Times and Uncle Woody on Sanford And Son) as mechanic “Merl the Earl.” It was rebooted as a feature film in 2004 with cameos by Soul and Glaser.

“Once upon a time, there were three little girls who went to the police academy,” the opening narration begins, as we meet a trio of beautiful detectives: sporty Jill Munroe (Farrah Fawcett-Majors), stylish Kelly Garrett (Jaclyn Smith) and level-headed Sabrina Duncan (Kate Jackson). The Angels are all ex-cops employed by the Los Angeles-based Townsend Detective Agency, owned by millionaire Charles Townsend (unseen in full face, but voiced by John Forsythe). John Bosley (David Doyle) serves as Charlie’s emissary and the Angels’ father figure (and occasional field back-up).

Producers Aaron Spelling and Leonard Goldberg struck gold again in this light-hearted crime series, originally broadcast from 1979-1984. Robert Wagner (It Takes A Thief, Austin Powers) and Stefanie Powers(The Girl From Uncle) star as Jonathan and Jennifer Hart, a suave millionaire and his gorgeous, journalist wife who moonlight as amateur sleuths. Together, they traverse the world in private jets and expensive sportscars, assisted by Max (veteran actor and blacklist survivor Lionel Stander), a combination butler and streetwise sidekick.

Created by Oscar-winning screenwriter and novelist Sidney Sheldon and developed by Tom Mankiewicz (Diamonds Are Forever, Live And Let Die) Hart to Hart is The Thin Man with Spelling hallmarks: beautiful people, opulent settings, and familiar faces from TV and film. (The guest star roster is a Who’s Who of 1980s Hollywood.) The pilot film debuted in August of 1979 and the series followed soon after, ranking in the top 20 in three of its five seasons. A series of made-for-TV movies reunited the cast nearly a decade later. “It was a wonderful experience,” Powers said of her TV marriage to Wagner.  We agree.

For airdates and times, visit the getTV schedule.