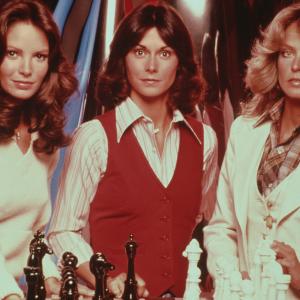 Picture it…Wednesday, September 22, 1976. There were three broadcast networks: ABC, CBS and NBC. There was no FOX or cable. And streaming? It wasn’t in anyone’s vocabulary. Yet, there was always something of note to watch on television.

On this very day, we meet Sabrina Duncan (Kate Jackson), Jill Munroe (Farrah Fawcett – then Fawcett-Majors) and Kelly Garrett (Jaclyn Smith). The name of the show is “Charlie’s Angels” – now a staple on getTV. The scoop: Despite proving their abilities during police training, all three women have subsequently been assigned to be a meter maid, an office worker, and a crossing guard, respectively. Dissatisfied with these mundane duties, they are recruited to work for the Charles Townsend Agency as private investigators.

Airing out of “Baretta” with Robert Blake, “Charlie’s Angels” was an immediate sensation. It faced dramas “The Blue Knight” on CBS and “The Quest” on NBC, causing the early demise of both. And it finished the first season ranked fifth overall in all of primetime (behind ABC’s “Happy Days” and “Laverne & Shirley,” the ABC Monday Night Movie, and “M*A*S*H” on CBS).

“Our intention was to never do a serious crime drama,” said “Charlie’s Angels’ creator and executive producer Aaron Spelling. “We wanted to provide an hour of escape each week, care of these three women and the adventures they faced. It was not something the critics took notice of. And look how well it has endured over the years.”

Indeed it has. More than 40 years after officially concluding its five-season run on ABC on June 24, 1981, “Charlie’s Angels” remains an American pop culture sensation. To-date, we have a movie franchise, a reboot TV show (in 2011), a comic book series, and a variety of merchandising (including dolls, a toy line, posters, board games, beauty products trading cards).

All things considered, this leads us to a very important question to ponder…who is your favorite “Angel”? Farrah Fawcett exited after just one season (to pursue a movie career), returning for six additional episodes in seasons three and four. Cheryl Ladd joined “Charlie’s Angels” in season two as Kris Munroe, the sister of Farrah’s Jill. Model Shelley Hack was added as Tiffany Welles in season four after Kate Jackson left. Then there was Tanya Roberts as Julie Rogers in place of Shelley Hack in the final fifth season.

Common consensus might point to golden girl Farrah as the hands down favorite. Remember her classic poster? But never rule out the remaining five, who through 115 one-hour episodes of “Charlie’s Angels” (all now watchable on getTV) remind us of the value of simply sitting down and forgetting about our troubles through this addictive escapist fare.

To whet your appetite for the adventures of Kate Jackson, Farrah Fawcett, Jaclyn Smith, Cheryl Ladd, Shelley Hack and Tanya Roberts (not to mention David Doyle, the voice of John Forsythe, and the array of familiar guest stars), here are some interesting factoids about “Charlie’s Angels” you may not know.

1. The original title of the series was “Alley Cats,” but Kate Jackson suggested “Charlie’s Angels” after seeing a picture of angels in Aaron Spelling’s office. Another title in consideration was “Harry’s Angels.”

2. Prior to “Charlie’s Angels,” Farrah Fawcett had the recurring role of Sue Ingham on ABC detective drama “Harry O,” starring David Janssen (post-“The Fugitive”), was from 1974-76.

3. “Charlie’s Angels” finished its second season (in 1977-78) ranked fourth overall in all of primetime (tied with “All in the Family” and “60 Minutes” on CBS). The top three occupants that season were ABC’s “Laverne & Shirley,” “Happy Days” and “Three’s Company”).

4. The original choice to play Kris Munroe was Kim Basinger, who was more interested in a movie career (and succeeded with her Best Supporting Actress Oscar for “L.A. Confidential” in 1998). Basinger did, however, guest star in the season one episode of “Charlie’s Angels” titled “Angels in Chains” in 1976.

5. Kate Jackson and Cheryl Ladd had previously worked together in the 1973 TV movie from Aaron Spelling, “Satan’s School for Girls.” It was remade in 2000 with Kate Jackson in the cast.

8. One of the reasons why Shelley Hack was cast was because she was the face of Revlon’s “Charlie” fragrance brand.

9. Shari Belafonte, who auditioned for the role of Julie Rogers, ended up being cast as Julie Gillette on ABC’s “Hotel” (yet another Aaron Spelling hit).

10. Success breeds imitation and CBS in particular, tried (but failed) to capitalize on the appeal of “Charlie’s Angels.” It introduced two dramas in the 1978-79 season that featured an array of beautiful women. The first was “Flying High” with Connie Selleca, Pat Klaus and Kathryn Witt as flight attendants. It lasted for 18 episodes. The second was the adventure series “The American Girls” with Priscilla Barnes (pre-“Three’s Company) and Debra Clinger as young journalists. It aired for 7 episodes.