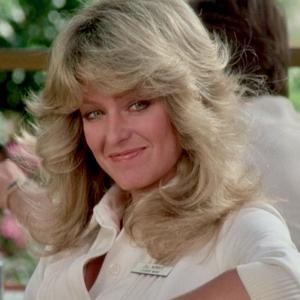 “Female private detectives?” a man asks incredulously on a 1976 episode of Charlie’s Angels.

It was, as they say, a different time. But scenes like this are a good reminder that casual gender bias is key to the Angels origin story. In the show’s iconic opening sequence, rookie cops Jill (Farrah Fawcett-Majors), Sabrina (Kate Jackson) and Kelly (Jaclyn Smith) are saddled with menial jobs, despite their extensive training. “But I took them away from all that,” their new employer Charlie (John Forsythe) says in voiceover, as three capable women strut out of the police station and into pop culture history.

“Charlie's Angels put women front and center in an action series,” Amanda Reyes, author of Are You in The House Alone? A TV Movie Compendium 1964-1999, told getTV. “My girlfriends and I mimicked the show on the playground. It opened doors in our minds that there were opportunities in the world we may not have considered before.”

The Angels were born 45 years ago this month in a TV movie from producers Aaron Spelling and Leonard Goldberg that upended a male-dominated genre. For five highly rated seasons, the series depicted women going undercover to catch the bad guys, just as men had done since TV’s earliest days. But their covers were often ones only a woman could pull off.

“They played with the stereotype of a ‘sexy’ woman and then turned it on its ear in every episode,” Reyes said. “The Angels have always been fashion icons, but it was never really about how they looked. For me, it was about how they carried themselves.”

Charlie’s Angels found its breakout star in Farrah Fawcett-Majors, a 29-year-old Texas native who had become a familiar face thanks to primetime guest spots and commercials. With the help of a best-selling poster and a hairdo that sparked a national craze, Farrah became an old-fashioned superstar. But her character was anything but traditional. Jill Munroe was a self-professed tomboy who tooled around L.A. in a muscle car, equally at home in tracksuit or evening gown.

“Although she was incredibly beautiful, Farrah was relatable,” Reyes added. “She was the athletic Angel: a daredevil who loved sports and had an interesting physicality you didn’t see in Sabrina or Kelly. She also had a lightheartedness to her that I really loved.”

The Charlie’s Angels writers identified these qualities in Farrah early on and gave her the most fun and physical undercover assignments. Here are ten favorites:

Jill partners with Charlie’s trusted assistant Bosley (David Doyle) in the series premiere, a  team-up that will reoccur throughout the season. Here Bosley doubles as Brother John, a revival tent preacher who ministers at racetracks. Jill is his daughter, playing dumb to investigate the murder of a woman driver and prevent a jewel heist. Highlight: Jill scams the thugs in a poker game, an early example of how she can hold her own with the boys.

“Women in Prison” films stretch all the way back to the 1930s, and this episode has fun lampooning (or celebrating?) the genre’s seediest tropes. The Angels infiltrate a Louisiana correctional facility where inmates pay their debut to society by doubling as call girls. Look for 22-year-old Kim Basinger in her TV debut as an inmate. Highlight: action hero Jill climbs on the roof of a moving pick-up truck to thwart a pursuer. “Sometimes I worry about her,” Kelly says to Sabrina.

The Angels go undercover at a resort to investigate the death of a young reporter, the daughter of an old friend of Charlie. Jill furthers her “athletic Angel” cred here by posing as a tennis instructor. (She was introduced in the pilot film playing tennis.) Highlight: Jill scales a warehouse and has a close encounter with a corpse.

The Angels investigate murders at the Feline Club, a cocktail lounge where the waitresses double as centerfolds. “I haven’t posed in the nude since I was six months old,” Jill protests. Highlight: we get a good look at Jill’s Malibu beach house, which sadly never became a playset. (But there was a Farrah action figure.)

Jill and Kelly go undercover in basic training when a general — yet another old friend of Charlie’s — hires the Angels to investigate the death of a WAC recruit. (The Women’s Army Corps was disbanded two years after this episode aired, when all units were integrated with male units.) Highlight: the Angels chase a plane in a Jeep. Guess which one ends up in flames.

Roller Derby, popular during TV’s early days in the 1940s, experienced a revival in California in the mid-1970s. So, it’s not surprising to see Jill suit up in a red, white and blue uniform — during the Bicentennial year — to investigate a possible murder in a Derby league. Stunt doubles handle the contact scenes, but Farrah does plenty of her own skating. Highlight: Jill beats the stuffing out of a shady teammate to the delight of a cheering crowd.

Exciting locales were key to the Spelling/Goldberg formula and Las Vegas was a short, four-hour drive from L.A. That may explain why the producers based a Starsky & Hutch two-parter there in 1976 and filmed an entire series (Vega$) in Sin City beginning in 1978. In between came this excellent episode, wherein the Angels investigate a blackmail and prostitution ring. Bosley and Jill hit the tables, the third time Jill uses gambling as part of an investigation. Highlight: a parking lot car chase  in which Jill ingeniously avoids a hitman.

When a hospital is plagued by attacks on the nursing staff, Jill and Kelly go undercover as nurses to investigate. Highlight: the opening scene, in which the Angels plot their investigative strategy. “The women were no longer being told what to do by Charlie; they were telling Charlie what they were going to do,” producer Barney Rosenzweig (Cagney & Lacey) said in a 2016 interview. Rosenzweig took over as showrunner midway through season one with a goal of “empowering” the Angels. It worked and he delivered some excellent, well-plotted episodes.

Two of the biggest crazes of the 1970s — Farrah Fawcett and Disco — come together in a fun episode set at a dance studio. The Angels are hired to expose a blackmail scheme masterminded by a handsome dance instructor (Dennis Cole, Jaclyn Smith’s husband). Highlight: Farrah dancing, a hilarious performance by Kate Jackson, and great use of the entire team to crack the case — including Charlie!

Farrah’s final episode as a regular cast member finds Jill and Bosley teaming up again. This time they’re posing as massage parlor operators to root out Vice squad corruption. The client: the Angels’ former police chief. Highlight: every scene with Farrah and David Doyle, who had delightfully playful chemistry. The Angels close out their groundbreaking first season by completing a successful assignment for a man who refuses to take women seriously as cops. “Another bastion of chauvinism crumbles, ” Charlie says.