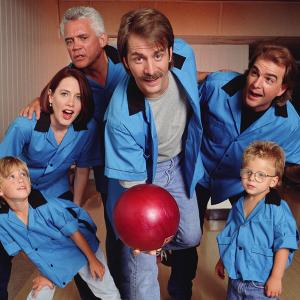 You don’t have to be a redneck to love the comedy of Jeff Foxworthy. Like Jerry Seinfeld, Roseanne, Louis C.K., and others who turned stand-up personas into popular TV characters, the Blue Collar comic had sitcom success in the mid-1990s with The Jeff Foxworthy Show. The same folksy charm that’s made Foxworthy one of most popular comedians of the last 25 years makes The Jeff Foxworthy Show a delight.

Enjoy some fun facts about this under-appreciated gem, which returns to primetime Tuesday nights on getTV!

While working for IBM in 1984, 25-year-old Foxworthy won a stand-up contest in his native Atlanta. Five years later, his best-selling book You Might Be a Redneck If launched a comedy juggernaut that included a Billboard-charting album, Showtime special, and countless licensed products.

2. This was not his first try at a sitcom.

In the 1992 CBS pilot Banner Times, Foxworthy played a reporter returning to his Georgia hometown to run the local newspaper. Evening Shade scribes David Nichols and Don Rhymer wrote the pilot, which Foxworthy described as “The Andy Griffith Show of the ‘90s.” The series didn’t sell, but the concept became the second season premise for CBS’ Hearts Afire with John Ritter in 1993.

With comedians headlining three top ten hits, ABC commissioned a pilot called Somewhere in America from Foxworthy in 1995. The network hated it, the comic later told the Chicago Tribune, and “fired everybody from the pilot but me." ABC bought the series despite their reservations, leaving Jeff and creator/show-runner Tom Anderson (Cheers) seven weeks to “come up with a show.” The newly titled Jeff Foxworthy Show debuted to high ratings on September 12 between Roseanne and Home Improvement.

Season one was like Banner Times in reverse, with small town fish Jeff out-of-water in Bloomington, Indiana with wife Karen and her waspy parents. Karen was played by Anita Barone, best remembered today as the chef who covets Elaine’s shoes on Seinfeld. Barone also originated the role of Ross Geller’s ex-wife Carol on Friends, played for the remainder of the series by Jane Sibbett.

Less than a year after playing Forrest Jr. in Forrest Gump, Haley Joel Osment was cast as Jeff and Karen’s seven-year-old son Matt. The child actor would achieve movie immortality in 1999 when he whispered “I see dead people” in The Sixth Sense, a performance that earned him an Oscar nomination. While no dead people appeared in season one of Foxworthy, multiple characters did disappear without explanation when ratings faltered.

6. The show was retooled midway through season one.

When the series struggled in its Saturday night timeslot, ABC began tinkering with it. Jeff’s co-workers Walt (Matt Clark) and Russ (Matt Borlenghi) were written out, along with snooty neighbor Craig (Steve Hytner) and Karen’s friend Sandi (Sue Murthy). Debra Jo Rupp (later Kitty Forman on That ‘70s Show) joined the cast as Karen’s sister Gayle, along with Jay Mohr as Jeff’s loudmouth brother Wayne and Michelle Clunie as his girlfriend. Foxworthy later said ABC execs complained the show was “too Southern,” which made the addition of Mohr’s stereotypical character all the more confusing.

7. The funniest episode of season one never aired on ABC.

The penultimate episode of the first season featured Jeff competing in a comedy competition. As if the autobiographical elements weren’t meta enough, Foxworthy the character rips off Foxworthy the comedian with “You might be a redhead if…” Sadly, the series was put on hiatus in late January and the episode never aired on ABC.

8. Foxworthy won a People’s Choice Award. Then his show got cancelled.

Foxworthy won a People’s Choice Award for Favorite Male Performer in a New TV Show after the series had been shelved. ABC then agreed to air the finale in May but, despite a ratings bump, cancelled the series. In the last ABC episode – co-written by Foxworthy and Anderson – Karen gives birth to a daughter. “This is gonna change all of our lives,” Jeff says to Osment at the fadeout. Viewers had no idea how right he was.

When The Jeff Foxworthy Show moved to NBC four months later in what we’ll call the “Earth 2” version, the family was now living in Jeff’s Georgia hometown, Karen was now a brassy brunette, and the baby girl had transformed into 4-year-old Jonathan Lipnicki (Jerry Maguire). Foxworthy and Osment were the only cast members to return, ostensibly as alternate versions of their season one characters. Neither seemed to care that mom looked different, though Jeff did make a pointed reference to Bewitched in episode 4. “Isn’t it crazy how they changed husbands like nobody would ever notice?” he said, as Karen rolled her eyes.

The rebooted series got a facelift on NBC, with episodes shot on film, more realistic sets, exterior photography, and a catchy new theme. But the biggest change came in tone, as the show morphed from a TGIF-style family sitcom to a Southern-fried ensemble comedy with a Mad About You vibe. Key to that shift was New York native Ann Cusack, older sister of John and Joan, whose wisecracking Karen was radically different from Anita Barone’s. If you want a good debate with a Foxworthy fan, ask them which Karen they prefer.

11. BONUS: Jeff Foxworthy and Bill Engvall are together again on getTV.

Season two got back to Foxworthy basics with small town stories and male bonding, and comic Bill Engvall was at the core of that as Jeff’s buddy Bill. After NBC cancelled the show (again) in 1997, Engvall and Foxworthy co-founded the hugely popular Blue Collar Comedy franchise and reunited on-camera for the Blue Collar TV sketch comedy show in 2004. Engvall also headlined his own sitcom, which now follows Foxworthy on getTV! The Bill Engvall Show also featured Steve Hytner, one of The Jeff Foxworthy Show cast members who inexplicably disappeared during the first season. So at least we know everything turned out okay.