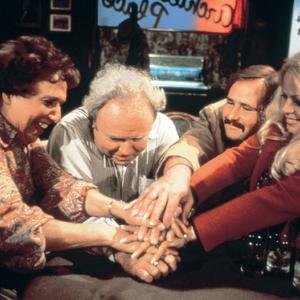 Nearly half a century after its creation, All In The Family remains one of the most influential and enduring sitcoms in TV history. For nine seasons, the Norman Lear comedy tickled funny bones and busted taboos with topics never before discussed in primetime. It was the top-rated TV show for five years, scored 22 Emmy Awards, and is #9 on Rolling Stone’s list of Greatest TV Shows.

At the center of it all was O’Connor, who transformed an anti-hero into an American icon. Archie evolved over the years, but O’Connor’s fiercely honest portrayal always retained the character’s core truth.

So, stifle yourself and enjoy these facts about the family who lived at 704 Hauser Street.

1. All In The Family was based on a British sitcom.

Norman Lear is one of TV’s most prolific creators, but All In The Family wasn’t entirely his idea. Lear based the series on Til Death Us Do Part, a British sitcom about a conservative father and his liberal son-in-law. “My dad and me, we fought about all of these things,” said Lear, whose own parents served as templates for Archie and Edith. “Meathead,” “Dingbat,” and “Stifle yourself” were all direct quotes from Lear’s father.

2. It was almost called Justice For All.

Lear and partner Bud Yorkin pitched the series to ABC in 1968, and the network immediately ordered a pilot. Justice For All featured 44-year-old O’Connor as “Archie Justice” with Stapleton (age 45) as Edith. ABC was uncertain, so they ordered another pilot five months later (using the same script), this time called Those Were The Days. “They didn’t want to put the show on the air,” Lear said. “They were afraid.”

3. There were three Glorias and three Meatheads.

The 1968 pilot featured Kelly Jean Peter as Gloria and Tim MacIntire as Richard (aka “Meathead”). The 1969 version co-starred Candy Azzara as Gloria and former Oakland Raider Chip Oliver as Meathead. Reiner, the son of The Dick Van Dyke Show creator Carl Reiner, was a family friend of Norman Lear’s, but Lear thought he was too young. Because it took three years from Lear’s pitch until the show reached the air, Reiner aged into the role.

When Lear offered Mickey Rooney the role of Archie, Rooney turned him down on the spot. “Norm, they’re going to kill you,” Rooney said, referencing the controversial content. Speaking of classic film stars, O’Connor later said he based Archie’s voice on James Cagney and Jackie Gleason.

5. The first episode included a warning.

When the third pilot (with Struthers and Reiner) aired on January 12, 1971, it was accompanied by a disclaimer: “The program you are about to see is All In The Family. It seeks to throw a humorous spotlight on our frailties, prejudices, and concerns. By making them a source of laughter, we hope to show – in a mature fashion – just how absurd they are.” In the first two versions, the show’s opening title was accompanied by “Suggested for the mature audience.”

6. All In The Family and Annie have something in common.

Almost as famous as Archie’s catchphrases was the show’s theme song Those Were The Days, composed by Charles Strouse with lyrics by Lee Adams. The duo is best known for writing the music for Tony winners Bye Bye Birdie in 1960 and Applause in 1970. Strouse also composed the music for Annie with lyricist Martin Charnin.

7. Jean Stapleton was a Broadway star.

Although Stapleton’s opening credits performance of Those Were The Days is played for laughs, she was actually an accomplished singer. The New York native performed on Broadway in Damn Yankees and Bells Are Ringing in the 1950s and recreated her stage roles in the film versions. Lear first saw Stapleton in Damn Yankees and cast her in his film Cold Turkey before production began on All In The Family. Stapleton and O’Connor had worked together once before: in a 1962 episode of the CBS legal drama The Defenders.

8. Carroll O’Connor wrote the lyrics for the closing theme.

Composer Roger Kellaway’s piano theme “Remembering You” closed every episode of the series. But many fans don’t know the catchy, Ragtime tune had lyrics – written by Carroll O’Connor. Kellaway and O’Connor performed the song on The Sonny And Cher Comedy Hour in 1972 and O’Connor was credited as co-writer beginning in season three.

9. Changes were made for the final seasons.

At the beginning of season eight, Archie buys neighborhood hangout Kelsey’s Bar and renames it Archie Bunker’s Place. Near the end of the season, Mike gets a teaching job in California and he and Gloria move away with baby Joey. To fill their empty nest, Archie and Edith take in her nine-year-old grand-niece Stephanie (Danielle Brisebois). Allan Melvin also saw increased screen time as Archie’s friend Barney Hefner.

10. All In The Family lived on in Archie Bunker’s Place. But Edith did not.

When Stapleton decided to move on after season nine, CBS requested that O’Connor continue without her. Lear agreed, on the condition that they change the show’s name. The finale of All In The Family aired on April 8, 1979 and a sequel series called Archie Bunker’s Place debuted on September 23. Brisebois and Melvin remained with the new show and Stapleton appeared in a handful of episodes until Edith dies (off-camera) from a stroke.

11. BONUS! All In The Family has more spin-offs than any other TV sitcom.

All In The Family begat seven spin-offs, directly or indirectly. Maude with Bea Arthur as Edith’s cousin was first in 1972. Next came The Jeffersons, with Sherman Hemsley and Isabel Sanford as Bunker neighbors who “move on up to the East Side” of Manhattan. Next was the short-lived Gloria in 1982, with Struthers raising Joey after divorcing Mike. Then came 97 episodes of Archie Bunker’s Place. And finally, 704 Hauser brought us back to the Bunker house with a new family living there in 1994. If you include spin-offs of spin-offs like Good Times (from Maude) and Checking In (from The Jeffersons), “The Bunkerverse” includes more than 860 episodes.

12. ANOTHER BONUS! “Archie” and “Edith” reunited one last time.

On April 24, 2000, O’Connor and Stapleton appeared together for the final time on Donny and Marie Osmond’s talk show. Stapleton and O’Connor hug, kiss, and hold hands while they reminisce, proving that they loved each other as much as we love them.