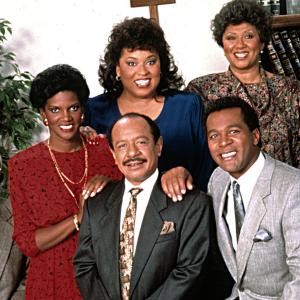 Creating an unforgettable character is a rare achievement on TV. Sherman Hemsley did it twice — with almost no break in between. A year after The Jeffersons ended its 11-season run, Hemsley moved on down I-95 from the East Side of Manhattan to inner city Philadelphia for six seasons on Amen.

Hemsley plays Ernest Frye, an attorney who’s just as greedy, opinionated, and stubborn as George Jefferson, but with a twist. He’s also a church deacon with little patience for those who disagree with him on how to run the parish. Enter Rev. Reuben Gregory (Clifton Davis), a young pastor on a mission to be the angel on Deacon Frye’s shoulder. Conflict ensues, especially regarding Frye’s unmarried daughter Thelma (Anna Maria Horsford).

More than 30 years after its debut, Amen remains one of the best loved sitcoms of its era. And you can see why when Deacon Frye joins the getTV congregation on January 2! Two episodes of Amen air back-to-back every weekday morning starting at 6a ET — part of our Funny Side Up sitcom block.

Here are some fun facts about this classic sitcom and its iconic star.

1. Amen has a strong Philly connection.

Sherman Hemsley and series creator Ed. Weinberger were born and raised in the City of Brotherly Love — Philadelphia, Pennsylvania. And, while the series was videotaped in a Los Angeles TV studio, the church in which it is set (the fictional First Community Church of Philadelphia) is “played” by an actual Philly landmark! The Mount Pisgah African Methodist Episcopal Church was built in 1833 and reconstructed in 1944 after a fire destroyed the interior. The opening sequence of the series — with Deacon Frye parking his car and greeting congregants — was shot there in 1986 and featured on all 110 episodes.

2. Amen was created by the writer/producer of Mary Tyler Moore and Taxi.

Edwin B. “Ed.” Weinberger began his career as a joke writer for comedians like Richard Pryor and Dick Gregory in the 1960s. He was one of the core creatives at MTM Enterprises in the 1970s, writing and producing The Mary Tyler Moore Show (1972–77) and creating the spinoffs Phyllis (1975–77) and The Betty White Show (1977–78). After co-creating and producing Taxi (1978–83) for five seasons, he developed Amen for Johnny Carson’s production company. Weinberger has won a Peabody Award and nine Emmys and recently co-wrote The Grouchy Historian with Lou Grant himself, Edward Asner.

3. Deacon Frye is basically George Jefferson in a church.

“They [NBC and Carson Productions] wanted the same elements that I had with George Jefferson,” Hemsley told the Television Academy Foundation in 2003. “(Except) I wasn’t as hateful as I was with George, and I smiled sometimes.” Hemsley also repurposed George’s signature strut, because “that’s what they do in Philadelphia.” Another key difference, according to Hemsley: Deacon Frye is “subservient” to his beloved daughter Thelma. “She runs his life!’ he said.

4. Anna Maria Horsford wore an unusual outfit to her audition.

Anna Maria Horsford began her TV career behind the camera, as a producer on the groundbreaking African-American variety series Soul. After a role St. Elmo’s Fire (1985), and while filming the TV movie Nobody’s Child (1986), Horsford was called in to meet with Weinberger. According to People, she came costumed in a “pink bathrobe, a pair of little-girl teddy bear slippers, and with a supermarket tabloid under her arm.” She got the job — playing the daughter of a man only ten years older than she was!

“Ed. Weinberger’s a brilliant guy,” Sherman Hemsley told the TV Academy. “He’d come up with some crazy stuff that I loved, like crashing through walls. He always could take it to that next level.” Hemsley said Weinberger reminded him of Norman Lear, the iconic writer/producer behind All In The Family and The Jeffersons. “They both had that genius thing happening,” he said. We agree.

6. Clifton Davis wrote one of the Jackson 5’s biggest hits.

Chicago native Clifton Davis began his career on Broadway with roles in Pearl Bailey’s version of Hello, Dolly! In the mid-1960s and a Tony nominated performance in Two Gentlemen Of Verona in 1971. Davis is also a songwriter, penning the chart-toppers “Never Can Say Goodbye” and “Lookin’ Through The Windows” for The Jackson 5, as well as “Here Comes The Sunrise” for The Supremes. He also released a solo album in 1991, appropriately titled Say Amen.

7. A minister played a minister.

In real life, Davis is an ordained minister with a Master of Divinity degree from Andrews University in Michigan. And while he was playing a pastor on TV, he was also a pastor in real life. From 1987 until 1989, Davis served as Associate Pastor of the Loma Linda University Church of Seventh-day Adventists in Southern California.

8. Amen was a reunion for two cast members.

Between 1974 and 1976, Clifton Davis starred as good-natured barber Clifton Curtis in That’s My Mama. Also in the cast of this two-season ABC sitcom: Jester Hairston as a tart-tongued senior. Twelve years later, the two would reunite on Amen, both playing very similar characters. Guest stars appearing on both shows include Mel Stewart (George Jefferson’s brother Henry on All In The Family) and Berlinda Tolbert (George’s daughter-in-law Jenny on The Jeffersons).

9. Jester Hairston was also a songwriter.

Jester Hairston (1901–2000) had an epic career that spanned the 20th Century and every branch of the entertainment business. He was: a Julliard-educated composer and singer; Broadway performer; radio star; actor in films like To Kill A Mockingbird and In The Heat Of The Night; and a songwriter. Hairston wrote “Mary’s Boy Child,” a Christmas carol with a Calypso beat that became a hit for Harry Belafonte. He also wrote and provided the dubbed voice for a song performed by Sidney Poitier in Lillies Of The Field (1963). The title of that song, which has since become a Gospel standard? Amen.

Amen’s theme song “Shine On Me” was performed by Gospel star Vanessa Bell Armstrong, a seven-time Grammy Award nominee. Her self-titled, major label debut album — released just months after the debut of Amen — yielded two crossover hits: “Pressing On” and “You Bring Out The Best In Me.” We defy you to listen to her infectiously catchy performance and not start strutting around your living room like Deacon Frye!