getTV talks SANFORD AND SON — An Interview With Demond Wilson 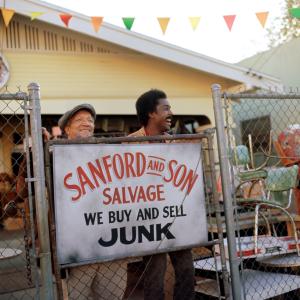 The 1970s was the Golden Age of Sitcoms. The witches, Martians, and talking cars of 1960s primetime were gone, replaced by sharply written comedies that reflected the social upheaval of the day. Much of the credit for this new era of TV sitcoms goes to producer Norman Lear, who kickstarted the revolution with All In The Family in 1971. But it was Sanford And Son, based on the British sitcom Steptoe And Son, that broke even greater ground — and was an immediate hit.

“Sanford and Son was the first all-black cast on network television since Amos and Andy,” co-star Demond Wilson told getTV. “When the pilot aired, it got a 52 (ratings) share, which is unheard of. It outdrew the World Series.”

Notorious nightclub comic Redd Foxx starred as junkman Fred G. Sanford, with Wilson as his more progressive son (and partner) Lamont. At age 25, Wilson was already a veteran performer. A native of Valdosta, Georgia who grew up in New York City, Wilson got his start at age six, dancing on stage and performing on radio. After a tour of duty in Vietnam that he says “hardened” him, the decorated veteran returned home and resumed his performing career. A role opposite Sidney Poitier in the action drama The Organization (1971) led to his TV debut on Mission: Impossible. Ironically, it was an All In The Family guest-starring role that introduced Wilson to sitcom viewers, in an unforgettable episode with Cleavon Little

After Sanford and Son, Wilson starred in Baby…I’m Back with Denise Nicholas (“a sweetie pie”) and The New Odd Couple with Ron Glass (who had also appeared on Sanford And Son). And then, as quickly as his star had risen, he traded it in for a life in ministry.

Today, Wilson is a fit and feisty 70-something and the author of three books, including Second Banana: The Bittersweet Memoirs Of The Sanford And Son Years. We spoke with him on the phone from Palm Springs, California, where he lives with his wife, Cicely. The following are highlights of that conversation, edited and condensed for space and clarity.

You’re famous for Sanford And Son, but you got your start with Norman Lear on All In The Family. How did that happen?

DEMOND WILSON: John Rich, who was a director of All in the Family saw me on Mission: Impossible. My agent called me and said, “They want you to do a TV spot on the number one show in America.” The script said I break into the Bunker house and put a gun to Archie’s head. I said, “Where do I sign?”

And this led to Sanford And Son?

A couple months later I got a call from Bud Yorkin (Norman Lear’s partner) who said, “I got a show I want you to do. I want you to star opposite Redd Foxx.” I said, “Is this a joke? You’re not gonna put Redd Foxx on television.” So, I flew to Vegas and met Redd.

What kind of a relationship did you have with Redd Foxx?

It went from mentor, to father/son, to older brother/younger brother. Whatever they said to Redd, he said, “Go ask my son. Whatever he wants to do, that’s what we’ll do.” We hit it off right away. Redd was straight up street, as was I.

How did you get along with the other cast members?

I got along with all of those characters. Hal Williams (Officer Smith a.k.a. Smitty) is a good guy. Whenever I see him it’s a lovefest. LaWanda Page (Aunt Esther) was a sweetheart. I got along with Bubba (Don Bexley), Rollo (Nathaniel Taylor) and Whitman Mayo, who played Grady.

Some of my favorite episodes are the ones that team you and Whitman Mayo when Redd Foxx was on strike during his contract dispute.

Yeah, we did some funny work together.

Would you have stayed with the show if Redd didn’t come back and Whitman Mayo became the lead?

No. I told Redd, and I told the producers, “I will do the show as long as Redd wants to. When he doesn’t want to do it anymore, I’m out.” They were gonna replace Redd.  They wanted me to do publicity shots with Whitman Mayo, and I refused. That’s when Redd and I really bonded, because word went back to him that Demond is standing strong, he’s standing with you.

Redd chose to leave after the sixth season. Was that a mutual decision?

We never had a beef until he walked away from the show, put it in the paper, and didn’t say anything to me about it. And after the show went off the air in ’77, I didn’t speak to Redd again until 1983, after I did Baby…I’m Back and The New Odd Couple. I never confronted him or broached the subject of why. That was his choice.

You got married in 1974 at the height of your success and you’re still together. That’s an unusual path for Hollywood!

I’m not part of that. I was never part of Hollywood. I worked there, and I went home.

You walked away from performing career in 1984. Why?

I worked steady from 1971 to ’84. I was burnt out. And the Lord came into my heart, so I scoured the country and the world for 15 years doing what the Lord commissioned. He said, “Spread the Word.” That’s what I did.

Sanford And Son is often called “groundbreaking.” Do you agree with that assessment?

Hollywood is not very creative. They jump on the bandwagon. As a result of our success they said, “Okay, black shows. We’re going to go with that.” So Good Times, The Jeffersons, That’s My Mama, Chico And The Man and all these other ethnic shows (got picked up). If we had failed, there wouldn’t have been any black shows for another decade. So, it wasn’t really groundbreaking, it was moneymaking.

And 48 years later, Sanford And Son is still playing in something like 40 countries.

If they did a live primetime Sanford And Son episode, would you be interested in a cameo?

I don’t do television. I don’t do movies. I get offered movies every week. I don’t want to be in front of the camera. That’s over.

What do you think the future holds for Sanford And Son?

Of all the television shows that have been done since the 1950s, only a handful of them have survived. As long as pop culture exists, Sanford And Son will be part of it.

For airdates and times visit the Sanford and Son show page. Connect with Demond Wilson on his website!