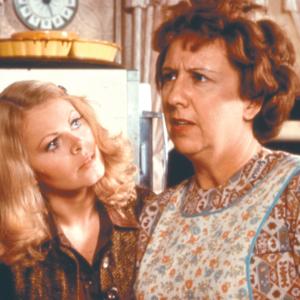 Carroll O’Connor may have been the star of All In The Family, but Jean Stapleton was the show’s heart. The New York City native played Archie’s long-suffering wife Edith Bunker for nine seasons, and made the role unforgettable.

In the hands of a lesser performer, Edith might have been one-note. Instead, Stapleton brought depth and heartbreakingly genuine nuance to the character of Edith. Her character softened O’Connor’s Archie and communicated a deep truth: you don’t always have to like the one you love. But even when Edith pushed back, she did it from a place of caring and compassion. She was a woman many of us recognized from our own lives, and we’ve never forgotten her for it.

So, stifle yourself and enjoy these facts about a true television icon.

1. Jean had performing in her blood.

“As soon as I graduated from high school, the desire to act seized me,” Stapleton told the Academy of Television Arts And Sciences. Her mother was opera singer Marie A. Murray, and Jean (born Jeanne Murray in 1923) took her maiden name as her stage name. Stapleton’s two children have also carried on the performing tradition.

Lear first saw Stapleton in Comden and Green’s original stage production of Bells Are Ringing, directed by Jerome Robbins. The actress and singer also appeared in the Broadway productions of Damn Yankees with Gwen Verdon and Funny Girl with Barbra Streisand. She returned to the Great White Way in the 1986 revival of Arsenic And Old Lace opposite fellow TV icon Marion Ross and toured nationally with the production. Stapleton recreated her stage roles in the film versions of Damn Yankees and Bells Are Ringing. She never won a Tony Award, but was honored with an Obie for her off-Broadway performances in Harold Pinter's The Birthday Party and Mountain Language during the 1989-1990 season.

3. Jean was cast almost three years before All In The Family’s first episode aired.

Because of the show’s groundbreaking content, All In The Family took a while to get on the air. Creator Norman Lear and partner Bud Yorkin shot two pilots for ABC (in 1968 and 1969) before finally landing a primetime home on CBS in January of 1971.  Although the actors playing their daughter and son-in-law changed from pilot-to-pilot, O’Connor and Stapleton remained the leads in all iterations of the pilot.

CBS and Universal offered her the now-famous role of Jessica Fletcher in 1983, but Stapleton turned it down. “I had just come off of eight and a half years in a series” she told the TV Academy, speaking of her recently completed tenure on All In The Family. “And I thought, ‘This isn’t for me, now.” Jean didn’t believe the series would offer her the same creative freedom that All In The Family did, but believed Angela Lansbury was perfectly cast. “Every time I saw Angela during those years, she’d thank me!” Stapleton said.

5. Jean played a second character on All In The Family.

In the final season of the series, All In The Family writers Bob Schiller and Bob Weiskopf penned an episode of the series in which she played dual roles. In addition to Edith, Stapleton also portrayed Judith Klammerstadt, the fiancée of the Bunkers’ German butcher Alvin Klemmer (Theodore Bikel). The actress credited as Judith was Giovanna Pucci, roughly the Italian translation of Stapleton’s married name: Jean Putch.