Join Roddy McDowall in THE FANTASTIC JOURNEY on getTV 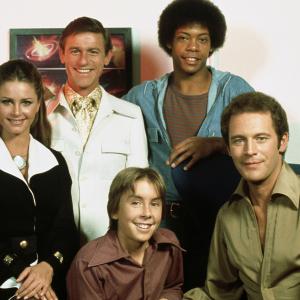 The late 1970s was a great time to be a science fiction fan. Star Wars conquered the box office in 1977 and brought nerdishness into the mainstream, launching countless similar (space) ships on film and TV. But one of the underrated treasures of that era debuted a few months too early and missed out on the rubber-suited alien renaissance - The Fantastic Journey. It's too bad because The Fantastic Journey is one of the most thoughtful and inventive sci-fi action series of its time. You can see what we mean this month when this hard-to-find series debuts on getTV over two special nights!

The year is 1977. A scientist (Scott Thomas) hires a grizzled captain (Leif Erickson) to sail his team to the Dominican Republic, a voyage right through the Bermuda Triangle. On board is teen genius Scott Jordan (Ike Eisemann), hot-headed young doctor Fred Walters (Carl Franklin), and other people you don’t have to worry about because – SPOILER ALERT – they don’t make it to episode two.

When their ship is sucked through a rift in the space-time continuum, the crew of the S.S. Yonder ends up trapped on an incredible island –  the show’s original title – where past, present, and future converge. There they meet Varian (Jared Martin), a time traveler from the year 2230 who, like the castaways, has been marooned with no idea how to return home. They also discover that the island is made up of a collection of time “zones,” and that crossing through each portal introduces them to new people from different eras, cultures, and even planets.

Their first adventure pits them against The Source (voice of Mike Road), a life force that governs the survivors of the lost city of Atlantis (with the help of guest stars Gary Collins and Mary Ann Mobley). There they meet Liana (Katie Saylor), a half-Atlantean/half-extra-terrestrial empath with super-human strength, and Sil-El, a black cat she communicates with telepathically. In the next zone they meet Dr. Jonathan Willaway (Roddy McDowall), a former NASA mechanical engineer who governs a race of androids he has created. When Willaway’s attempts to marry – more like abduct -- Liana are thwarted, he instead decides to quit Evil Genius’ing and join the travelers.

Their mission: to find a time zone called EvoLand, where each of them will be transported back to his or her own time.

Created by Bruce Lansbury (brother of Angela), produced by Leonard Katzman (Dallas), and story-edited by D.C. Fontana (Star Trek), The Fantastic Journey has the tone and spirit of a 1940s Saturday morning sci-fi serial. If you prefer your references more contemporary, think Lost meets Quantum Leap, with nods to sci-fi precursors like Lost In Space and The Time Tunnel. There’s also a healthy dose of the delightful, low-budget cheesiness of classic Doctor Who, especially as the series progresses.

The cast is stellar, with genre superstar McDowall (Planet Of The Apes) perfectly cast as the smarmy and vaguely villainous Willaway. Eisemann (Disney’s Witch Mountain films) makes a perfect Will Robinson to McDowall’s conniving Dr. Smith-esque antihero. Franklin (who went on to become a critically acclaimed film director) is the action hero of the group. Saylor is gorgeous and exotic as the cape-wearing female lead. And Martin’s Varian is the handsome, evolved hero from a future where there are no wars, no violence, and complete harmony. (Where is that place and how can we get there?)

Although The Fantastic Journey has developed a cult following over the decades, it was not a ratings success in its initial broadcast. It didn’t help that the show faced powerhouse competition in its timeslot against hits like The Waltons and Welcome Back, Kotter. Audiences may also have been confused by cast and storyline changes in early episodes. NBC dropped most of the actors from the pilot episode and nixed the storylines it set up, including lost WW II pilots and a village of 16th Century pirates run by Ian McShane. The network’s preference was for futuristic sci-fi, which led to the addition of Saylor for the second episode and McDowall in episode three.

“We had a very short prep time,” Fontana said in an interview with author John Kenneth Muir. “The pilot was sold in November and we had to be on the air the following January. It was a race to get scripts ready.”

Ironically the show found its creative voice at around the same time NBC began to lose patience with the ratings. Pre-emptions followed the fourth and fifth shows, and even the addition of big name guest stars like Joan Collins, Mel Ferrer, and Cheryl Ladd couldn’t right the ship. The Fantastic Journey ended after just ten episodes, with an eleventh script completed but un-filmed.

Not long after Fantastic made its final journey, shows like Battlestar Galactica and Buck Rogers In The 25th Century rode the Star Wars wave to primetime. And an armada of similar live-action adventure shows invaded the Saturday morning universe. Sadly, time was not on Fantastic Journey’s side.

Read our interiew with star Ike Eisenmann on the getTV blog.