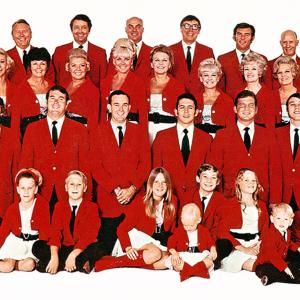 You may be familiar with the Jacksons and the Osmonds, but one iconic family of performers predates those acts by decades: The King Family.

“America’s First Family of Song” is best known today for their TV success in the 1960s and ‘70s. But the act actually began decades earlier as a trio of singing siblings. After enjoying consistent popularity from the 1930s through the ‘50s, The King Sisters expanded to become The King Family in 1964. With an ensemble of relatives numbering in the dozens, the Kings entertained a generation with a TV series, seasonal variety specials, record albums, and live concerts.

This year marks the 50th anniversary of Christmas With The King Family, their beloved 1967 Christmas special. And getTV will celebrate with its premiere on November 29 and broadcasts through the holiday season. Whether you grew up with The Kings, are introducing them to kids or grandkids, or are just discovering them today, getTV is the place to be this Christmas.

So roast up some chestnuts and enjoy these fascinating facts:

1. “The King Family” began as “The Driggs Family”

Patriarch William King Driggs Sr. was a music teacher in Pleasant Grove, Utah when he decided to form a family act with his wife Pearl Driggs and their seven kids. He moved the brood to California in the late 1920s, where “The Driggs Family Of Entertainers” performed at venues all over the West. An eighth child was born in 1931.

Eldest sisters Maxine King (born 1911), Luise King (1913) and Alyce King (1915) formed a trio in 1931, adopting their father’s middle name to become The King Sisters. They made their debut on KLX radio in Oakland and were soon signed by bandleader Horace Heidt as vocalists for his Musical Knights orchestra. Younger sisters Donna King (born 1918) and Yvonne King (1920) soon joined the act and, when Maxine married and retired, The King Sisters became a quartet. Luise married jazz guitar virtuoso Alvino Rey and the the Sisters moved to Rey’s band in 1939, where they became a fixture on the charts. Twenty of their recordings were Top 30 hits between 1941 and 1945.

The King Sisters quartet began performing in movies as a musical “specialty act” in 1936’s Crash Donovan. Over the next decade they would appear in nine features and two shorts, including Second Fiddle (1939) with Tyrone Power at Fox, 1943’s Follow the Band and Larceny With Music (both with Luise’s husband Alvino Rey) at Universal, and Meet the People (1944) and Thrill of a Romance (1945) at MGM. Their final film was Cuban Pete (1946) with Desi Arnaz, soon to be a superstar on I Love Lucy.

The Alvino Rey – King Sisters Show debuted on NBC in 1953, with baby sister Marilyn King (born 1931) replacing Donna. Members of the extended family also appeared on this series, marking the first time the Kings would perform as a “Family.” The sisters also appeared together on popular ‘50s TV shows like The Steve Allen Show and Ozzie & Harriet.

As tastes changed in the ‘50s, The King Sisters (now Yvonne, Alyce, Luise, and Marilyn) updated their sound to a jazzier style and signed a new contract with Capitol Records. 1958’s Imagination (also featuring Alvino Rey) was a hit with audiences and critics and earned a Grammy nomination. "Esquire Magazine said that we were an up and coming new group!” Yvonne said in an interview. “We had been around for almost 30 years.”

6. Yvonne King came up with the idea to do a “Family” show.

Second-youngest sister Yvonne organized an extended-family charity performance at Brigham Young University in 1963, which was filmed. She then took the film to ABC and pitched them on a multi-generation variety program. “My mother had a lot of guts,” Cathy Cole told the website Pop Culture Addict. “We were already singing (together) on stage, so this is where my mother got the idea for the King Family Show.”

After The King Family – now including “aunts, uncles, brothers, and sisters” – made an appearance on The Hollywood Palace in early 1964, ABC was deluged with 60,000 fan letters. A pilot special called The Family Is King aired in August, with a weekly series following in January of 1965. Thirty-nine family members appeared on the series including formerly retired sisters Maxine and Donna; brothers Karleton King and Billy King; Alyce’s husband Bob Clarke, a star of sci-fi films; Yvonne’s daughter Tina Cole, soon to be a cast member on My Three Sons; and Alyce’s son Cam Clarke, future voice of cartoon heroes like He-Man. Patriarch “King Driggs” also appeared in early episodes before his death in 1965 at age 75.

8. There was a spin-off group.

After performing on The King Family Show for two seasons, a spinoff group of second generation King performers was formed. “The Four King Cousins” featured Tina and Cathy Cole, daughters of Yvonne; Candy Conkling, daughter of Donna; and Carolyn Thomas, daughter of Maxine. The Cousins were regulars on NBCs’ Kraft Summer Music Hall in 1966 (alongside fellow cast member Richard Pryor) and toured nationally with host John Davidson in 1967. Capitol Records signed them to a recording contract and their debut album Introducing The Four King Cousins was produced by Alyce’s son Lex de Azevedo. They also headlined 13 episodes of a second King Family Show series on ABC in the summer of 1969.

9.  The King Family found their niche in TV specials.

After two successful seasons on ABC Saturday nights at 8 p.m., The King Family Show transitioned to a series of syndicated seasonal specials. One of the first was Christmas With The King Family, originally aired in December of 1967 (and repeated annually for a decade). The Family starred in 17 specials between 1964 and 1974, but the first Christmas show remains their best-remembered program.

10. The King Sisters capped their career with a presidential performance.

11. BONUS The musical legacy of The King Family lives on.

Christmas With The King Family premieres November 29 at 10 pm ET and airs throughout the holiday season on getTV. For more, visit the getTV schedule.