THE LIFE AND TIMES OF GRIZZLY ADAMS — 10 Unforgettable Episodes 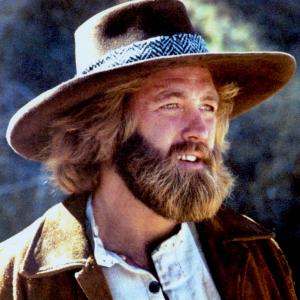 The life and times of James Capen Adams — the actual historical figure upon whom the fictional “Grizzly Adams” was based — lasted longer than many of his contemporaries. The mountain man died in 1860 at the ripe old age of 48, more than eight years longer than typical life expectancy for that era.

The Life And Times Of Grizzly Adams had a far shorter lifespan — just two seasons on NBC a century later. But it has endured in the hearts and memories of viewers like few shows before or since. And you can see why, when getTV presents this TV classic Sunday mornings at 9 am ET!

The Grizzly Adams saga began with a 1972 novel in which author and filmmaker Charles E. Sellier Jr. (pronounced sell-ee-AY) reimagined the man as an animal-whispering Doctor Dolittle, befriending the same creatures the real Adams had hunted and collected for sport and profit. Sellier’s production company Sunn Classic Pictures shot a low-budget film adaptation in 1974 with stuntman and animal handler Dan Haggerty in the title role. Improbably, it became one of the highest grossing films of the year and Sellier quickly produced a sort-of sequel The Adventures of Frontier Fremont. That 1976 film also starred Haggerty and Native American actor Don Shanks (who played Nakoma in Grizzly Adams), but added character actor Denver Pyle as a fellow mountain man.

When a TV broadcast of Grizzly Adams in May of 1976 scored big ratings, NBC quickly ordered a weekly series. Sellier chose to mash-up Grizzly and Fremont for TV, with Pyle’s crusty old trapper serving as Adams’ mentor and series narrator. The Life And Times Of Grizzly Adams debuted in February of 1977 against stiff competition: Good Times on CBS and The Bionic Woman on ABC. A total of 37 episodes were produced over two seasons, along with a wealth of licensed products that some readers (or writers) of this article may still have in our attics or basements!

All the episodes are fun and family-friendly, but here are ten that will give you an overall understanding of the show.

The 1972 Grizzly Adams movie concludes with Adams being cleared of the murder accusation that sent him into hiding. Producers ignored these developments for TV, winding the clock back to his days as a fugitive survivalist. The first episode mostly dispenses with backstory, introducing Adams as a mountain superhero who rescues a little girl (Kristen Curry) separated from her pioneer parents (Henry Kendrick and Lucky Hayes). We also meet Ben the grizzly (played by Bozo the Bear as an adult and Bart the Bear as a cub), cantankerous Mad Jack, and Jack’s sidekick burro Number Seven.

The second episode retells much of the film’s plot and establishes two of the show’s recurring characters: Nakoma (Shanks) and Robbie Cartman (John Bishop), the son of a homesteader. In a flashback that repurposes footage from the film and expands upon it, Adams rescues Nakoma, nurses him back to health, and becomes his blood brother. And, in a sequence not seen in the movie, Nakoma returns the favor three years later, rescuing Adams when he’s nearly crushed by a falling tree.

The real James Adams lived alone in the wilderness, but that wouldn’t have made much of a TV show. This episode establishes the show’s periodic practice of dropping guest stars into the woods and allowing Adams to find them, or vice-versa. First up is Ken Berry (F-Troop) who plays a travelling salesman searching for a lost carpetbag filled with stolen money. We also meet Joshua the Racoon, one of a growing supporting cast of anthropomorphic critters. This show also includes original music by Thom Pace, who wrote the theme song “Maybe.” (Fair warning: if you are a sentimental person of a certain age, Pace’s music may produce a tear or two.)

Even though we’ve already met Robbie in episode two, this show— the first one produced, but the fourth one aired — introduces the boy and his homesteader father (Ronny Cox). Mr. Cartman is a “shoot first and ask questions later” settler whose stubbornness places him and his son in danger. Unwelcome Neighbor also establishes Adams as an ecological activist and hero for those of us raised in the “Give A Hoot, Don’t Pollute” 1970s. “These mountains will feed you if you just give them a chance,” Adams tells the trigger-happy Mr. Cartman. “You don’t have to cut nothing down, dig nothing up, or kill anything.” That is the enduring philosophy of Grizzly Adams: non-violence, sustainability, and respect for man, animal, and nature.

This flashback episode tells the story of the tumultuous first meeting of Mad Jack and Adams a few years earlier. Adams doesn’t cotton to Jack trapping or shooting his animal friends, and Jack thinks Adams is a hopeless “greenhorn” who won’t last a week in the wilderness. Fisticuffs ensue! It was a brilliant decision on the part of producers to tell these origin stories in flashback. It allows viewers to have the best of both worlds: established relationships between the core characters and the fun of first meetings.

Theodore Roosevelt was only two years old when the real Grizzly Adams died in 1860, but that didn’t stop Western novelist Samuel A. Peeples from scripting an episode where Adams and Jack meet the future president. The dorky, teenaged T.R. is played by the underrated character actor Charles Martin Smith (American Graffiti, The Untouchables). This is the most broadly comedic episode of the series so far, and a fun — though entirely fictional — origin story for a man who would become one of the great outdoorsmen of his day.

Fans will notice subtle differences in season two, including changes in the opening sequence and “Ben” elevated to principal cast member! Another change: a greater reliance on guest stars and outside forces to drive stories. This episode finds French hot air balloonist Andre Gerard (Gino Conforti) landing in the middle of Adams’s camp. It’s a fun story, but an example of how the show had to embrace traditional episodic storytelling over the delightful, nature documentary esthetic of the original film. For history buffs, Gerard’s plan to speed up the Pony Express with “air mail” delivery places this episode in 1860–61: after the death of the real Adams!

This fun episode builds upon Ken Berry’s guest appearance in season one with a reunion of his F-Troop co-stars: Forest Tucker and Larry Storch (wearing his F-Troop hat!) Two bumbling gold prospectors wander into Adams’s territory — which is like the Grand Central Station of the Wilderness — and wreak havoc. Adams, Jack, and the critters rescue them, and People’s Choice Award winner Haggerty delivers an inspirational pep talk only he could pull off without sounding corny.

An author (Tiffany Bolling) wanders into Adams’s camp with a vendetta against the black bear that killed her father — and directs her vengeance toward Ben. This episode is significant for two reasons: it introduces the young brave Totawny (Todd Tingey) and it’s the first in which Nakoma speaks fluent English. Apparently, he’s been taking ESL classes in night school.

Sadly, The Life And Times Of Grizzly Adams aired its final regular season episode on May 12, 1978. Adams and the animals plan to celebrate Jack’s birthday, until Jack is stricken with a fever that makes him turn against our hero. Adams’s fate was finally resolved four years later in The Capture Of Grizzly Adams (1982), a made-for-TV reunion movie with Haggerty (but not Pyle or Shanks) that changes the ending of the 1974 film. Happily, The World’s Greatest Bounty Hunter concludes with the entire TV series cast — human and critter — celebrating together one last time. “You never lost us,” Adams says to Mad Jack. “That’s what real friends are all about.”

The Life And Times Of Grizzly Adams airs Sunday mornings at 9 am ET on getTV. Any episode is a great one to start with! For more, visit the show page.