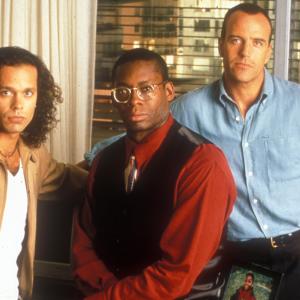 What if a cynical cop developed the mystical powers of a Peruvian shaman? That’s the premise of The Sentinel, a late-1990s action series starring Richard Burgi.

The Sentinel is an inventive mash-up of police procedural and superhero show, with enough sci-fi to keep genre fans happy. Burgi is perfectly cast as the wisecracking Ellison, a man not entirely thrilled with his new-found powers. He and Maggart have great buddy chemistry, despite – or because of – their character’s radically different personalities (Jim is hot-headed; Blair is super Zen). The series also has a strong supporting cast, including Bruce A. Young as perma-exasperated Capt. Simon Banks.

Here are some fun facts about this fan favorite:

1. Burgi and Maggart have performing in their blood.

Burgi’s parents were musicians and his older brother Chuck has been a drummer since the late 1970s, recording or touring with Hall and Oates, Diana Ross, Meatloaf, Bon Jovi, and Billy Joel. Maggart is the son of actor Brandon Maggart, who guest starred on a season one episode of The Sentinel. Garett’s half-sister is Fiona Apple, the singer/songwriter of ‘90s hits like “Criminal” and “Shadowboxer.”

With his good looks, Burgi has been cast in soap operas for his entire career. His big break came in 1986 with a two-year gig as former pimp Chad Rollo on the NBC soap Another World. Burgi previously had small roles on Ryan’s Hope and Guiding Light, and would later work on One Life To Live (1988), As The World Turns (1988-89), Days Of Our Lives (1992-93) and General Hospital (2015-16). He also appeared on the soapy nighttime drama Desperate Housewives (2004-12). Maggart had recurring roles on Days Of Our Lives in 1994 and again in 2004.

3. Burgi was almost The Flash.

The Sentinel was created by Danny Bilson and Paul DeMeo, the creative duo behind the 1990 TV version of The Flash. After an extensive search for an actor to play the title character, Bilson and DeMeo landed on two candidates: John Wesley Shipp and Richard Burgi. They went with Shipp, but cast Burgi as vigilante philanthropist Curtis Bohannan, a.k.a. Deadly Nightshade. Between The Flash and The Sentinel, Bilson and DeMeo also cast Burgi on the NBC action series Viper in 1994.

4. The Sentinel takes place in a city that doesn’t exist.

The series was originally set in Seattle until city officials requested otherwise and “Cascade, Washington” was born. (There’s a reference to the Seattle Supersonics in the pilot; in later episodes, the basketball team is the fictional Jaguars.) The University of British Columbia in Vancouver stood in for fictional “Rainier University” in location shots. In fact, most of The Sentinel was filmed in Vancouver, a Canadian city whose coastal climate and topography matches Seattle, um, Cascade perfectly.

In the pilot, Blair explains to Jim that his research derives from The Sentinels Of Paraguay, a scholarly monograph by British explorer and ethnologist Sir Richard Francis Burton. “In all tribal cultures, every village had what Burton named a ‘sentinel,’” Blair tells Jim. “This was someone who patrolled the borders like a watchman. Tribal survival depended on him.” While Burton (1821-1890) was an actual historical figure who studied indigenous peoples in South America, he did not actually write the volume Blair uses as resource.

6. A new cop joins the Cascade P.D. near the end of the series.

Inspector Megan Connor of the New South Wales P.D. comes to Cascade on an officer exchange program near the end of season three. Though Megan is only supposed to be visiting, Australian actress Anna Galvin appears in a revised opening credit sequence for that episode, tipping off viewers that this is for keeps. Galvin delightfully up-ended the show’s macho energy, but she unfortunately slipped from regular to recurring status in the final season. Odd coincidence: Jim remarks that Megan “looks like Cruella de Vil.” Galvin went on to play Madeline de Vil – Cruella’s mother – on ABC’s Once Upon A Time in 2015.

7. For some fans, Jim and Blair were a couple.

As often happens on shows were two characters save each other’s lives, some Sentinel viewers “shipped” Jim and Blair and wrote romantic stories about them. While this wasn’t the intention of the show’s creators, they were respectful of the interpretation. “The appeal of the show has always been, at least with the fans, the friendship,” co-creator Danny Bilson said in 1999.

8. There were two sentinels.

In the season three finale Sentinel Too, Blair inadvertently discovers another individual with sentinel abilities. Alexis Barnes (Jeri Ryan) is beautiful but deadly, as Blair learns when she SPOILER ALERT kills him. Ryan had previously appeared with Burgi on The Flash. The two would also work together again on CBS’s Shark in 2006 and ABC’s Body Of Proof in 2013.

9. Fans – and the Internet – saved the show from cancellation.

Blair’s apparent death at the hands of Alex was the season three cliffhanger, but it almost went unresolved. When UPN announced their primetime schedule for the fall of 1998, The Sentinel wasn’t on it. Fans mobilized, launching a “Save Our Sentinel” campaign that included ads in USA Today and a demonstration at the Television Critics Association press event. The SOS campaign was one of the first fan actions of the Internet Age to “go viral,” using DIY websites, chat rooms, and newsgroups. Happily, the struggling UPN was impressed by the effort and reversed their decision.

Producers knew a shortened season four would likely be the last gasp, so they wrote an actual finale in which Blair’s unfinished doctoral dissertation about Jim is leaked to the press. It’s The Sentinel’s equivalent of Bruce Wayne being revealed as Batman. The finale includes fun, meta touches like characters wondering who will play them in a TV series and a reporter reciting the show’s opening narration verbatim in a news story. While producers left often the possibility of return, they also provided fans with a genuine happy ending. And for Jim and Blair “shippers,” there’s even a final bro hug in the last scene.

You can read Richard Burgi’s exclusive interview with getTV here. For more, visit the getTV schedule.