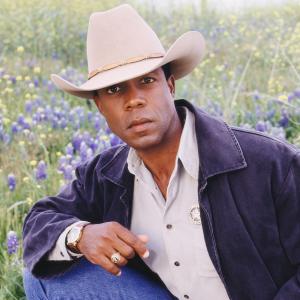 Walker, Texas Ranger was one of the biggest hits on television when it originally aired in the 1990s and it remains incredibly popular with fans today. One of the reasons for its ongoing success is the chemistry between its stars - Chuck Norris as Ranger Cordell Walker, Clarence Gilyard as his partner Ranger Jimmy Trivette, and Sheree J. Wilson as Assistant District Attorney Alex Cahill. We were lucky enough to speak with Clarence recently, who shared his appreciation of mentor Andy Griffith, how much he loved the physicality of Walker, and the importance of family.

Hi Clarence! Thanks for sitting down with us. How are you?

Blessed. I am blessed.

We just spoke with Sheree [J. Wilson]. You two have been friends for some time now, right?

Yes, there are a lot of coincidences. Sheree was doing a film with Chuck [Norris] in Israel. And then I told Chuck it was really dumb for him to audition anybody else. When they got back to Los Angeles, I got hired. And then Sheree and I realized that we lived on the same beach, and around the corner from each other. [laughs] Yeah. We’ve known each other for a long time. A long time.

Yes, it’s great. And now we've been working on Driving Miss Daisy around the country together.

Right! I am linking to Sheree's website ShereeJWilson.com so people can get more information about the production and your tour dates. I think that is so exciting.

So let me go back even before Walker because I’m intrigued by one of your earliest roles...I mean, it really was a role that you became known for, which was starring opposite Andy Griffith on Matlock.

Like many, I’m a huge Andy Griffith fan. I think his performance in the 1957 film Face In The Crowd is one of the best ever.

Yeah. There’s a great story he told me. You know, Elia [Kazan, director of Face In The Crowd] didn’t want him for that role, so Andy actually - and I can share this with you - he actually went out and drank a lot.

I had a great time with Andy. He was such a good mentor for me. He taught me a lot, you know?

What stays with you from your time with him?

I wasn’t funny before I met Andy.

[Laughs] Is that right?

That’s the truth. I mean, he would tell me in between shots about the point of view, where the lift on the joke was, what the operative word was. Well, you know, because I was uncomfortable - it was Andy Griffith! I grew up with Andy Griffith.

You know, he was a surrogate father on television. So he had to calm me down. But he hired me, you know? I had the screen test in New York, and he hired me, so he believed in me.

It sounds like he’s a technician and an artist in one.

Right. So, speaking of smart, let’s talk about Chuck.

How did you come to know Chuck? How did that relationship evolve?

I was selling a show to CBS. I was about to sign a contract for a pilot for my own television series, but my agent said, “Hey, you should probably look at this [part for Walker, Texas Ranger].” Chuck had made a deal with CBS for 13 episodes on the air. And I figured, you know, 13 checks versus one check.

Made a lot of sense. And I was pretty much a cowboy back then. When I looked at the breakdown for the character [of Ranger Jimmy Trivette], it was pretty obvious. And because I knew all my competition in town [of other actors auditioning for the part], it was pretty obvious that I was really the only person that could fit that character. You need to fit a character in a television series.

And why did you think that - because of the physicality of it?

Because of the physicality - because I was a martial artist, because I rodeoed, because I played college football. All those things that was what the character was.

So the character existed on paper before you came to it. It wasn’t necessarily written for you, even though it seems like it is.

Definitely. And you can tell, I think, because of the success of the show, that it did pretty much fit. I mean, once somebody starts doing a franchise like that, they can really do no wrong because they’re the person if it takes off. Just like Sheree’s character, just like Chuck, just like Noble [Willingham, who played C. D. Parker].

Yes. And then I’m assuming you were close with Chuck, right? I mean, you had a friendship beyond your onscreen relationship.

Yes, it was great. He was great. He knew what he was doing. And I wanted to move into a more physical role. That’s why I left Matlock - because I was not going to get to grow as a physical actor.

So do you feel that through the years of doing Walker that you had a tremendous amount of input as far as the character's arc and evolution?

You had all of it. That’s fantastic. Now I'm sure you get this question all the time - what do you think it is about Walker that makes it so popular? I mean, the show still has so many passionate fans.

I’ll tell you what it is. People are living a lot longer, and television in the home can still be a family event. It’s a family pastime. And Walker, even though it was moving into a high-action genre, was still a family show. And essentially, we were a family [on the show] and people allowed us into their homes. They liked our family, the chemistry was there. Chuck did a pretty good job putting together a family.

And you know, right and wrong in a lot of people’s psyches is still black and white. The cowboys were the good guys.

Right. Right. What’s so interesting about Walker is there is an action component, obviously, to it. But today if you developed an action show, I don’t know that it could or would be the same...there’s such a moralism about this show. Again, like you’re saying, the right and the wrong.

Yes. I think it’s a challenge for writers outside of that cohort, if they didn’t experience it, to write for it. You know what I’m saying?

I do. Do you have a favorite episode of the series?

Oh, I think the pilot.

The pilot. The first episode.

When I think about it, to be honest with you, the pilot was amazing.

What about it makes it stand out so much for you?

It was an amazing experience. Just because it was coming off the heels of...what was that? There was a movie that was huge with the black cop and a white cop and...what was it? The one with Danny Glover and Mel Gibson.

Yes. That’s another reason why the show worked, I think. It came on the heels of that movie and the relationship of those two characters.

Right. Oh, and speaking of popular 1980s movies - and this is just a totally random side thing - but I loved that you come from an Air Force family and then you were in Top Gun as a Navy flyer. [laughs]

Yeah, that was great. That was a good coup. There’s a huge story that goes with that, too. When we do another interview, I’ll definitely share that. It was an amazing story.

Oh wow - that’s quite a teaser for next time, Clarence! [laughs] Well, thank you so much for today. I've really enjoyed talking with you and appreciate everything you've shared. We're excited to have Walker, Texas Ranger on getTV!

My pleasure. God bless you and thank you!