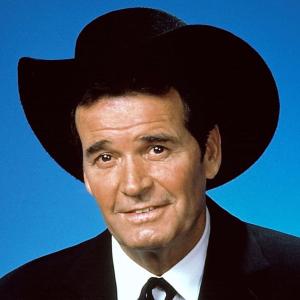 If they made a Mount Rushmore of TV stars, James Garner’s face would be forever etched in stone. From Maverick in the 1950s to The Rockford Files in the 1970s to the sitcom 8 Simple Rules in the 2000s, Garner was a beloved familiar face for half a century.

And getTV is proud to consider this TV icon a member of our family! His 1981–82 series Bret Maverick airs on Saturdays and Sundays starting at 5p ET – part of our Weekends Under The Big Sky lineup of classic Western TV shows!

We didn’t call them “reboots” back in the ‘80s, but Bret Maverick is just that: a series that continues the story of a popular character decades later. Country singer Ed Bruce co-stars, along with Garner’s Rockford Files partner in crime-solving Stuart Margolin and more famous faces than you can shake a six-gun at.

Born James Bumgarner in Norman, Oklahoma in 1928, Garner was a decorated war hero who became both a TV star and an Oscar-nominated film actor. From The Great Escape (1963) to The Notebook (2004), Garner’s film roles allowed him to stretch in a way that TV did not. But television audiences were always ready to welcome him back for the next light-hearted adventure.

“It’s difficult for some actors to sink their teeth into both mediums, but not him,” daughter Gigi Garner told getTV in a recent interview. “He did something that was very unusual in Hollywood.”

Gigi describes herself a “jack of all trades,” with careers as a recording artist, songwriter, author, and jewelry designer. The daughter of the man who played Rockford even briefly worked as a private investigator, until she discovered it’s “not as glamorous as it appears on television.” But she says her dad always had her back, whatever path she was on. “He was always supportive,” she told us.

And now she’s returning the favor. Five years after her father’s death at age 86, Gigi has launched The Official James Garner Facebook Page so people will, in her words, “get to know my dad as a real person.” She’s also established an animal rescue charity in his name, the James Garner Animal Rescue Fund.

But helping animals is nothing new for Gigi, who’s been a rescuer for more than 30 years. “People have been given the huge responsibility of having dominion over animals,” she told us. “It’s our duty as human beings to take care of them.”

We talked to Gigi on the phone from her home in California. The following are highlights of that conversation edited and condensed for clarity.

Your dad lost his mom when he was very young. Did that impact the man he became?

I’m sure it did. My dad had a very difficult life and it really is remarkable to me how he overcame so many obstacles. He came from nothing and ended up being one of the most famous actors in the world. And then, when he got to the top of the totem pole, he didn’t act like a superstar.

Why do you think that was?

I think it had to do with him coming from Oklahoma. He was a very loyal Oklahoman who never forgot where he came from. I think that’s kind of unusual. People get very caught up in the whole Hollywood thing. He never did.

And he brought that realness to all his roles.

My dad was a very complex human being. In real life he wasn’t exactly what you saw on TV, but he was still able to bring certain elements of his real character to the characters he played. There’s definitely a thread from Maverick to Rockford. He played this tongue-in-cheek kind of guy: laugh at yourself and people will laugh with you, not at you.

How did he go from the Army to an acting career?

It was serendipity. My grandfather had moved to Los Angeles from Oklahoma. So, my dad came to L.A. and ended up with all kinds of odd jobs: laying carpet, working in a gas station, and a few little modeling jobs. And from that, he ran into a guy he knew who became an agent.

What was his first acting job?

He was in the traveling company of The Caine Mutiny Court-Martial. Charles Laughton was the director and Henry Fonda starred. He had four lines. Every night he would sit there and watch Henry Fonda. That’s how he learned to act.

He met your mom in 1956, married her two weeks later, and stayed married until his death. Did his commitment to family play a role in his success?

I think everybody needs a solid foundation. If you have that, you can clear your mind to do other things. But he was a very devoted family man. I can tell you that.

He went from four lines in a play to starring in Maverick three years later. That’s a quick jump to stardom.

He was a contract player at Warner Bros. at the time. He did a guest role on something and they said, “Hey let’s try this guy” for Maverick. And when it’s right, it’s right. He was making something like $175 per week doing Maverick, but he was thankful to have a job.

He became a movie star almost as quickly as he had become a TV star. Do you remember the first time you saw him on the big screen?

I remember seeing The Thrill Of It All in a theater (in 1963). There’s a scene where he drives into a swimming pool and you could see the car going down, down, down. And I started screaming because I thought my dad was drowning.

In 1981, he revived the Maverick character for what we might call a “reboot.” It’s common today, but pretty unusual back then.

I think he understood what people like and would gravitate to. My dad was a very smart person. He didn’t have a whole lot of school, but he was really street-smart.

Was he nervous about ‘80s audiences embracing a character he first played in the ‘50s?

I’m sure it crossed his mind, but I don’t think he got too wrapped up in “I hope this works!” He was never like that. He was like, “Let’s give it a shot. If it sticks, it sticks. If it doesn’t, move on to the next thing.”

He was in his 50s when he returned as Bret Maverick, and he played the character as a man in his 50s. Nowadays, most actors would try to act like they’re still 20.

Yeah. It was really kind of a brave, bold statement for him to do something like that. But my dad was never afraid of what anybody thought. He just always did what he felt was a good fit.

Bret Maverick reunites your father with Stuart Margolin, who played Angel on The Rockford Files. Do you have a relationship with Stuart?

I love that man. He would say that my dad was as good to him as his own father. They were very much like two peas in a pod. They got along really well, and Stuart really respected my dad.

How did Ed Bruce — the Country singer who did “Mammas Don’t Let Your Babies Grow Up to Be Cowboys” — end up as your dad’s co-star on Bret Maverick?

At the time, my dad was really close friends with Waylon Jennings and Willie Nelson and the boys, and he would hang out with all those Country & Western peeps. He ended up getting to know Ed Bruce really well and liked him so much that he cast him.

What was your dad’s favorite of the films he made?

I think his overall favorite was The Americanization of Emily (1964) with Julie Andrews, because that was a real statement at the time, written by Paddy Chayefsky. My dad really embraced that character and he had incredible chemistry with Julie Andrews. A close second was Grand Prix (1966), where he did all the driving himself, even the stunts.

Did he ever drive in actual races?

Yes. He owned a racing team and drove in the Baja 1000 and came in second. He loved racing.

How did James Garner feel about his fans?

He loved the fans. He never, ever denied a picture, an autograph, or a handshake. He just genuinely loved people, and he wasn’t pretending.

Your dad continued to act well into his ‘80s.  What do you think was his favorite part of the work?

I think his favorite part of the work was just showing up. He was the first person on the set every day. He loved going to work, being with his crew and the cast. He loved the camaraderie. And he loved making things that people enjoyed watching.