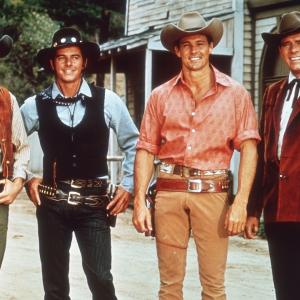 With every boom comes a bust, and the TV Western boom of the 1950s was no different. By the mid-'60s, audiences had begun to tire of the genre that dominated television’s first decade as a mass medium. But movie studios had found a lucrative new business producing episodic Westerns on existing films sets and backlots, and wanted to keep milking the cash cow. So producers began scrambling to put new spins on familiar stories and settings.

Universal’s Laredo found its solution with laughter. While the hour-long adventure series — in living color! — wasn’t strictly a comedy, it has the tone and style of the light-hearted action/adventure shows that would dominate primetime 15–20 years later. Think The A-Team in the Old West.

With only 56 episodes, Laredo was not widely rerun in the decades after its original run. And that’s a shame, because its buddy comedy vibe feels a lot more contemporary than many other TV Westerns of its era. You can see what we mean every Saturday and Sunday morning on getTV! Here are some fun facts about this quirky classic:

1. Laredo is a spinoff of an iconic Western series.

In the third season finale of NBC’s popular The Virginian, Wyoming ranch hand Trampas (Doug McClure) travels to Mexico to pick up a bull. While passing through Laredo, he encounters three Texas Rangers who would soon star in their own series. Written by Borden Chase (an Oscar-nominee for Red River), Laredo’s “backdoor pilot” We’ve Lost A Train aired on April 21, 1965 and featured Brand, Brown, Smith, and Carey. The series — from executive producer Richard Irving (The Name Of The Game, The Six Million Dollar Man) — premiered five months later. Both shows were produced by Universal’s Revue Studios production arm, which would be renamed Universal Television in 1966.

2. Laredo and its parent show shared cast and crew.

Considering that both shows were filmed on the same lot, it’s not surprising that Laredo and The Virginian shared personnel. What’s amazing is the total number: nearly 350 actors, stunt men, writers, directors, and crew members have credits on both programs. Famous faces who appeared on both shows include teenager Kurt Russell, Burgess Meredith, George Kennedy, Peter Graves and Star Trek actors DeForest Kelly and James Doohan. (More on the Trek connection below.)

3. Neville Brand was a war hero.

Brand enlisted in the National Guard in 1939 and served in the Army for the entirety of World War II, earning a Silver Star and a Purple Heart for a combat wound that nearly ended his life. He used the G.I. Bill to study acting after the war and had his first credited film role as a sadistic thug in D.O.A. (1949). After killing Elvis Presley in 1956’s Love Me Tender (the King’s first film) and playing Al Capone in two movies and on TV’s The Untouchables, Brand was seemingly irrevocably typecast as a villain. Laredo changed that, at least for two seasons.

4. Phil Carey was a Western icon.

Carey was a war hero as well, serving in the Marines in World War II and the Korean War. The rugged 6’4” actor started in Westerns early in his career, making his first appearance in Warner Bros’ Cattle Town (1952). His Western output increased after he signed with Columbia Pictures, with the first of many lead roles coming in The Nebraskan (1953). Carey was 40 when Laredo began in 1965, five years younger than Brand, but he’s clearly meant to be perceived as the older, more mature captain.

In its first season on NBC, Laredo aired on Thursdays at 8:30 pm, against the popular comedies My Three Sons on CBS and Bewitched on ABC. Ratings were mediocre, and the series was moved to Friday nights at 10 pm for season two where the competition was equally fierce: The Avengers on ABC and movies on CBS. When Laredo vacated its Thursday night timeslot in 1966, it was replaced by Star Trek.

Comic books based on TV shows were popular in the 1960s, and Laredo was no exception. In June of 1966, Western Publishing imprint Gold Key published a Laredo comic with art by Alberto Giolitti. The cover was a color photo of the cast, and all four leads were featured in the story The Stagecoach That Never Arrived. (Wolders had not yet joined the cast.) Sadly, there was only one issue produced. Cover price: 12 cents!

Wolders, born in the Netherlands in 1936, had only been acting for a short time when he was cast on Laredo in 1966. His career ended just as quickly a few years later. In 1975 he married his Interval (1973) co-star Merle Oberon, who was 25 years his senior. They remained together until her death in 1979 at age 68. A year later, Wolders began a relationship with film icon Audrey Hepburn and became her partner in both life and her charitable endeavors. Following Hepburn’s death in 1993, Wolders had relationships with Oscar-nominated actress and dancer Leslie Caron and with Shirlee Fonda, widow of Henry Fonda.

8. Neville Brand became a star without a show.

“I think some of the people with the network didn’t like him,” Smith said of his outspoken co-star in an interview with the website Western Clippings. Evidence of the growing schism between Brand and the network: Claude Akins was added to the recurring cast in season one, Wolders was hired for season two, and Brand does not appear in half of the last dozen episodes, including the finale. If Laredo had returned for a third season, it’s believed that Akins would have replaced Brand.

9. There were two Laredo movies. Kind of.

A year after the series ended, Universal cobbled together three episodes from season one into a theatrical release called Three Guns For Texas (1968). In 1969, the 75-minute pilot episode was combined with additional footage from an earlier episode of The Virginian and released theatrically as Backtrack!. No new footage was shot for either of these releases. They also weren’t marketed with the Laredo name, so unsuspecting Western fans might have ended up paying for something they had already seen on TV.

11. Bonus! There was a Laredo reunion. Sort of

In 2005, Peter Brown and William Smith reunited for what would be Brown’s final role. The drama Hell To Pay brought together icons of Western TV shows, including Brown and Smith’s co-star on The Virginian James Drury!

For airdates and times, visit the Laredo show page.